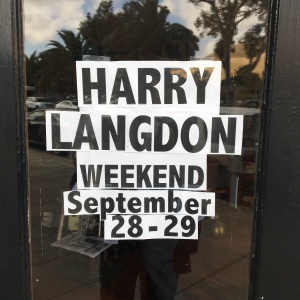 I was honored to be invited to take part in the Harry Langdon Film Festival at the Niles Essanay Silent Film Museum on September 28-29. Apart from a certain three year period, the Little Elf has never gotten a lot of love, not even in the silent comedy community, so it was an exceedingly rare chance to see many of his films screened and to bond with fellow fans, many of whom were folks I’d known electronically for many years but never met in person. In addition to the folks who work at the museum, I was thrilled to meet the Langdon Fest committee members, including Tim Greer, who writes and edits the Feet of Mud blog, for whom I wrote my 2015 article about Langdon’s talkies; local singer/songwriter and Langdon Fest committee head Frances Ancheta Becker (who thrilled us by singing Langdon’s excellent song “Lulu”, which had been unearthed by Ben Model); Chicago-based scenic artist Nicole Arciola of ReincarnationOfHarryLangdon.com, who re-created the backdrop from Langdon’s vaudeville act, and was the only one there rocking Langdon cosplay; and Gabriella Oldham, author of Harry Langdon: King of Silent Comedy. Bill Cassara, author of many great books on Ted Healy, the Three Stooges, and Vernon Dent, also presented, as did Doug Gibson of Planninecrunch.com. But I was also thrilled to get to meet attendees like Paul Etcheverry, whom I know best as Psychotronic Paul; John Bengston of SilentLocations.com; Steve Smith, who was director of the Ringling Brothers clown college for ten years; and Jeffrey Weissman, classic comedy revivalist and cast member of the Back to the Future films, Pale Rider, et al.

There were also terrific video intros from folks who couldn’t be there in person like my friends Ben Model and Steve Massa of the Silent Clowns, as well as Michael Hayde, co-author of Little Elf, Rob Farr of George Mason University, and author James Neibaur. Paul Gierucki of CineMuseum, LLC contributed Langdon home videos. For a list of what films were shown, and other events at the festival, see our earlier post here. 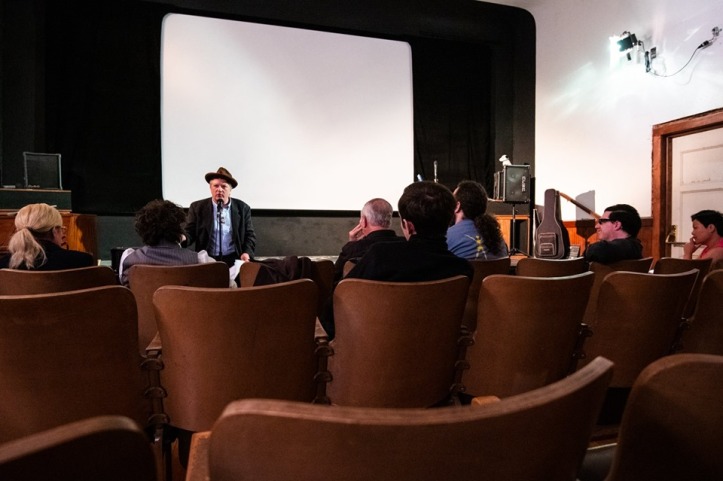 And I…I talked about Harry and vaudeville. In preparing my talk, and in attending the festival I learned tons of new stuff about Harry, so look for my existing post on the comedian to be beefed up sometime in the near future.

Some more pix of the event: