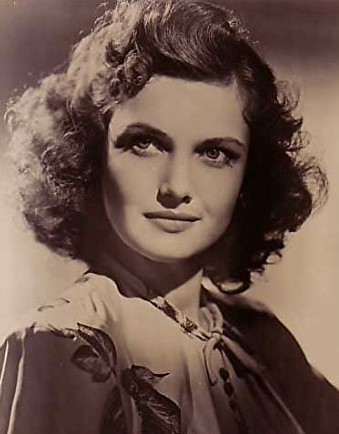 Just to confound things, Lois Andrews (Lorraine Gourley, 1924-1968) was not one of the Andrews Sisters. With only a half dozen screen credits to her name she is a bit of a footnote in these annals, but one worth mentioning.

Andrews was a sixteen year old chorus girl when she became Georgie Jessel’s third wife, following in the footsteps of Florence Courtney and Norma Talmadge. The pair were married in 1940; they had one daughter, Jerrilyn.

At the time, Jessel was a producer at Fox; he cast her as the lead in Dixie Dugan in (1943). This adaptation of the famous comic strip was in her only starring role, and the one she remains best known for.

Jessel and Andrews divorced the same year, but Jessel clearly retained a soft spot for, as he also cast her in the autobiographically-titled Meet Me After the Show in 1951. Her other films were Roger Touhy, Gangster (1944), Western Heritage (1948), Rustlers (1949), and The Desert Hawk (1950).

Andrews appears to have learned her matrimonial philosophy at the feet of Jessel, for she was linked about as many times as he was. In 1944 she announced a marriage to millionaire sports franchise owner Dan Topping, who’d previously been married to Arline Judge, but that appears not to come off.  Instead she wed actor and singer David Street in late 1945, but the marriage only lasted a few months. In 1946 she married B movie actor Steve Brodie, a union that lasted only 1949. Following her 1952 marriage to actor/musician Ernest Brunner, she retired from the movie business.

To learn more about show biz history, please see No Applause, Just Throw Money: The Book That Made Vaudeville Famous