August 11, 1892 was the birthday of Florence Courtney (Florence Grismer). With her sister Fay, she was one half of the vaudeville singing duo The Courtney Sisters. Joe Laurie, Jr. called them “one of the first great harmony sister acts”. Originally from Texas, the Grismer family moved to Missouri, and then finally to New York, where their mother pursued a career as a model and the daughters tried to break into show business.

They’re already making a noise in vaudeville by 1912; by that point they were already popular enough to feature on sheet music, like this immortal classic from that year:

In 1914, Florence married ragtime piano player Mike Bernard, a rake who had previously had an affair with Blossom Seeley, fathered children out of wedlock with a Ziegfeld girl, and was to marry two other times. Not surprisingly, they divorced two years later. 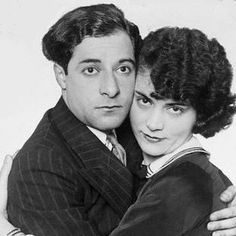 One gets Jessel’s side of their rocky romance in his typically self-serving autobiography So Help Me. The Courtney Sisters were big time when the Florence and Jessel got together, whereas Jessel was still kind of second tier. But that was the year his own career broke out as well. The way he paints it, everything conspired to undermine the marriage. First both husband and wife were too busy. Fay was against her sister’s marriage, afraid it would break up the act. Then Jessel was out of work and not bringing in dough. Then he was working again. Then there were affairs because they were apart. They separated almost immediately, then got a formal divorce in 1921. Then they got back together, then broke up again, then remarried in 1923.  Meanwhile, the Courtney Sisters had broken up; Florence appeared solo in five Broadway shows through 1925. Then she did retire from show business and became intensely religious, which further alienated Jessel. So they were frequently separated, she didn’t like to go out and party more, and had lost the “whoopie” energy that had attracted him in the first place. There were plenty of affairs. Still, they didn’t get divorced again until 1932. Perhaps out of spite she kept “forgiving him” which was pretty clearly what he didn’t want. He had begun seeing Norma Talmadge during their marriage; she was to be his second wife in 1934.

When Florence passed away in 1989, she had remarried; her surname was then Mayehoff.

To learn more about vaudeville, including acts like the Courtney Sisters, consult No Applause, Just Throw Money: The Book That Made Vaudeville Famous, available at Amazon, Barnes and Noble, and wherever nutty books are sold.