This being Father’s Day and a Sunday, I thought I would give myself (and hopefully you) a treat by dropping Part Two of my previous post on comic strips adapted into movies during the classic era. This piece will concentrate on talkies from the late ’20s through the early ’50s. One difference I noticed was that, as opposed to the ones produced during the silent era, there were fewer comical comic strips adapted during the sound era; there is a higher percentage of adventure and melodrama in the mix. I think this can be attributed to the death of the comedy short and its replacement by serials and B movies. But some comedies were still produced, a couple of them enduring classics. As before, we are leaving out animated adaptations; we’re just surveying live action versions. 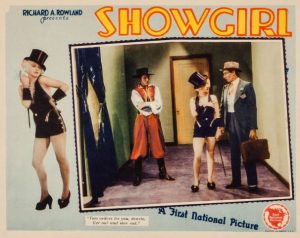 This popular phenomenon seems to arrive in the world in several media all at once. It began as serialized stories by J.P. McEvoy in the pages of Liberty magazine 1928-29. McEvoy was the man who wrote The Comic Supplement which provided the sketches W.C. Fields appeared in, in The Ziegfeld Follies of 1925 (and would later form the basis of several of his films). The Jazz Age flapper character of Dixie Dugan was based on Louise Brooks, who had appeared with Fields in the Follies and his 1926 film It’s the Old Army Game. The serialized material was then published as two novels, Show Girl (1928) and Hollywood Girl (1929). The comic strip Show Girl (later renamed Dixie Dugan) was launched in 1929 and ran through 1966. This is a rare case where a property made it to the movies prior to the funny pages. The films Show Girl (1928) and Show Girl in Hollywood (1930) both starred Alice White. The first was one of those transitional films that used music and sound effects but no dialogue. The second was a full on musical. A 1943 remake, Dixie Dugan came out starring Lois Andrews, the 3rd wife of Georgie Jessel. For more on this phenomenon read my extraordinarily gifted wife here. 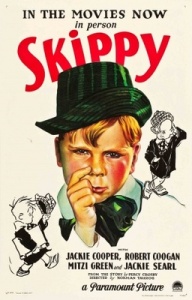 Percy Crosby’s strip about a mischievous little boy ran from 1923 through 1945. In 1931 it was made into a film starring young Jackie Cooper, directed by Norman Taurog, who won an Academy Award for his efforts. 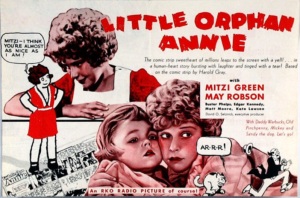 This wildly successful strip ran from 1924 through 2010, reaching its peak popularity during the Depression, when the titular orphan girl (and her dog Sandy) and her adventurous dream life as the ward of millionaire Daddy Warbucks had maximum appeal. It was one of the first strips adapted to radio; the popular show ran from 1931 through 1942. Mitzi Green was the first first film Annie in 1932 in the RKO film Little Orphan Annie. Paramount released a film with the same title in 1938 starring Ann Gillis. Today audiences are much more likely to know John Huston’s 1982 adaptation of the Broadway musical. 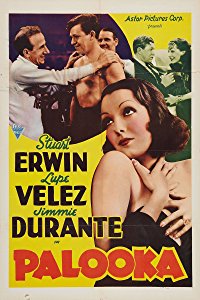 Created by Ham Fisher the proverbial boxing strip (so well known it became idiomatic) ran from 1930 through 1984. For many years it was one of the most popular comic strips in the country — in the top five. A radio series was briefly tried in 1932. Then in 1934 came the feature film Palooka, with Stuart Erwin as the titular boxer, Jimmy Durante as his trainer, and Lupe Velez as his girl and Marjorie Rambeau as his mother. Nine Vitaphone Joe Palooka shorts were released from 1936 through 1937 with Robert Norton as Joe, and Shemp Howard in the Durante role, Knobby. Probably best known to posterity is the series of 11 Joe Palooka B movies released by Monogram Pictures between 1946 and 1951. These starred Joe Kirkwood as Joe and Leon Errol as Knobby. Kirkwood returned for a try at a TV series in 1954; Slapsie Maxie Rosenbloom was in the cast for that one season show. 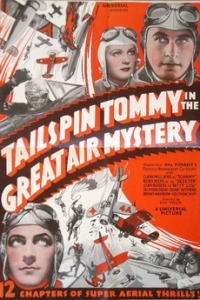 The first of the great aviation themed strips, Tailspin Tommy ran from 1928 (one year after Lindbergh’s famous flight across the Atlantic) through 1942. Universal first serialized the character for the big screen in 1934 starring Maurice Murphy. Clark Williams played the character the following year in Tailspin Tommy in the Great Air Mystery. In 1939, four hour long adventures were produced starring John Trent: Mystery Plane, Stunt Pilot, Sky Patrol and Danger Flight. 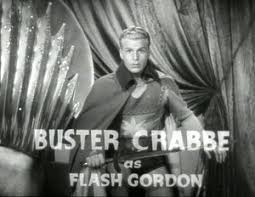 The evergreen space opera Flash Gordon was created by Alex Raymond in 1934 to compete with the virtually identical Buck Rogers. The strip ran until 2003. There were three serials made of the strip starring Olympic swimmer Buster Crabbe: Flash Gordon (1936), Flash Gordon’s Trip to Mars (1938), Flash Gordon Conquers the Universe (1940). The incomparable Charles Middleton played the terrifying villain Ming the Merciless. Crabbe also made three Buck Rogers serials in 1939 and 1940. Audiences today may better know the campy 1980 Dino de Laurentis version with music by Queen, which was made in the wake of the smash hit Superman (1978). 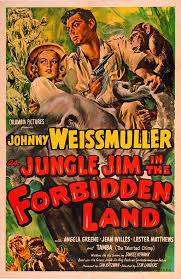 At the same time he was creating Flash Gordon, Alex Raymond was also turning out Jungle Jim, which debuted at the same time. A serial starring Grant Withers was released by Universal in 1937. Better known is the series of B movie features starring swimmer Johnny Weissmuller (who had previously played Tarzan), released between 1948 and 1956. There was also a Jungle Jim TV series starring Weissmuller than ran 1955-56. 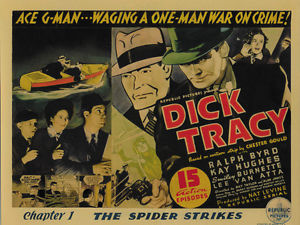 Chester Gould’s gritty, grotesque detective strip ran 1931-1972 and was a popular radio series from 1934 to 1948. Several Republic serials of the strip were made starring Ralph Byrd: Dick Tracy (1937), Dick Tracy Returns (1938), Dick Tracy’s G-Men (1939), and Dick Tracy vs. Crime, Inc. (1941). Then came four features for RKO: Dick Tracy (1945) and Dick Tracy vs. Cueball (1946) both with Morgan Conway as the title flatfoot, and Dick Tracy’s Dilemma (1947) and Dick Tracy Meets Gruesome (1947), in which Ralph Byrd returned to the role. Boris Karloff portrayed Gruesome! In 1950, a TV series was tried, again starring Byrd, lasting a single season. Nowadays of course all this earlier work has been overshadowed by the 1990 Warren Beatty film, but honestly the later version is a faint replica of the gritty original stuff. 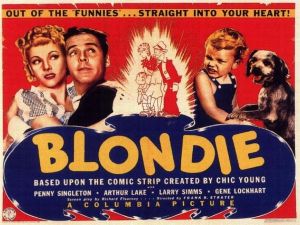 Possibly the most successful of all the adapted strips of the classic era, silent or talkie. The popular strip was launched by Chic Young in 1930, and is still being turned out by his successors. The success of the strip led to a series of popular B movies, 28 of them, from 1938 through 1950. Penny Singleton was the title character; Arthur Lake portrayed her silly husband Dagwood. The strip also resulted in a popular radio series with the same cast, which ran from 1939 through 1950. A TV sitcom was tried in 1957, with Lake reprising his role as Dagwood, and Pamela Britton playing Blondie (Singleton was nearly 50 years old at this stage, much older than her character. So was Lake older than his, but you know how that goes.) This show lasted a a single season. Another sitcom was tried 1968-69 starring Will Hutchins and Patricia Harty. It only lasted 13 weeks. At any rate, I am a particular fan of the original film series. The only reason I haven’t done a proper blog post on it yet, is that there are so many of them! I’ve probably seen 1/7 of them — I want to see them all first so I can give the proper treatment. 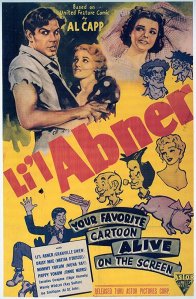 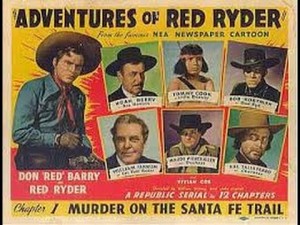 This western themed comic strip by Stephen Slesinger and Fred Harman ran from 1938 through 1968. It was such a hit it was almost immediately made into a serial by Republic Pictures. The Adventures of Red Ryder (1940) starred Don “Red” Barry. The studio went on to produce 27 B movies features through 1947, most of them starring Barry. After this, Eagle-Lion films took over the franchise, creating four more films through 1950. A TV series followed in 1951. Young Robert Blake played a character named “Little Beaver” in some of the films and TV.  Best known today no doubt is the radio version, which aired from 1942 through 1951, for it was immortalized in the 1983 classic A Christmas Story, in which young Ralphie’s fondest hope is to get a Red Ryder BB gun for Christmas. The Red Ryder franchise was one of the most successful comic strips in terms of licensing such merchandise to kids. 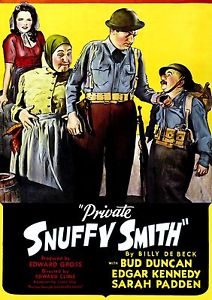 We already wrote a bit about Barney Google and Snuffy Smith, and their original silent incarnations in our previous post. There were also two low-budget sound adaptations by Monogram pictures in 1942: Private Snuffy Smith and Hillbilly Blitzkrieg. These starred former silent comedian Bud Duncan as Snuffy. Cliff Nazarro played Barney in the second of the two films. Edgar Kennedy was also in the cast. I’ve seen these two comedies; “bizarre” and “depressing” would not be adjectives that were too strong in describing them. 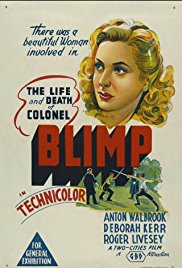 The British Colonel Blimp comic strip, about a pompous reactionary army officer was launched by David Low in 1934. This one was unusual for the time, in that it’s screen adaptation The Life and Death of Colonel Blimp (1943), was not a work of “low art”, i.e. a short or B movie, but a relatively distinguished film. For it was written, directed and produced by the screen by the team of Michael Powell and Emeric Pressburger a.k.a The Archers, the guys who gave us Black Narcissus, The Red Shoes, The Tales of Hoffmann and Peeping Tom. Like their best known work, the film was made in gorgeous Technicolor. It featured Roger Livesy, Anton Walbrook and Deborah Kerr. 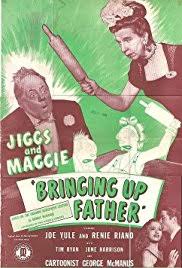 Bringing Up Father (Jiggs and Maggie)