In addition to being Martin Luther King Day (see previous post), it also happens to be the first day of Broadway Week here in New York. We observe it with a little post about some musicals that mattered to me as a kid and consequently, exerted an influence.

These aren’t necessarily my ten favorite musicals. There are certainly older and newer ones I would want to add and I doubt I could get it down to ten if it came to that. But these are the founding ten in developing my taste, the ones I played (or heard played) the most as a young person. And if these aren’t my ten favorites, they are certainly ten OF my favorites, and ones I have great personal attachment to.  In no particular order:

I didn’t actually own this album but the older kids in Sunday school brought it in and played it to death. It was probably my first soundtrack album, and (at the time) about a subject that was near and dear to my heart, and a story I knew well, full of tunes that ranged from upbeat to soulful and beautiful. The recent use of it on Transparent put it back in my head recently, reminding me how much I love it. I’m pretty the sure the record the kids had was the movie soundtrack as opposed to the Broadway one.

We blogged about Hair recently when Galt MacDermot passed. Read that appreciation here.

This remains my favorite musical. It was my first Broadway show. I saw it on a school field trip when I was 13 or 14 years old, on my first visit to New York (1980). We also studied it in class. And I suppose the excellence of this show, and the degree to which I love it, spoiled the chances of nearly every other musical of making it into my heart. It’s funny, it’s tragic, it’s cool, it’s modernist, it’s classicist, it’s political, it’s entertaining…it’s everything. I have real trepidation about what Spielberg is going to do it in his remake. Debbie Allen of Fame was in the production I saw (I also loved Fame). My record was from the film version, not the Broadway show.

I played Moonface Martin in our school production in my sophomore year of high school. It was certainly one of the influences that steered me toward loving the pop culture of the early 20th century, and artists like Cole Porter, Guy Bolton and P.G. Wodehouse. I had the 1962 off-Broadway cast album with Hal Linden, Kenneth Mars, and Mickey Deems. I still know all the songs by heart.

We did this one in senior in high school, and I suppose you’ll never believe me if I tell you that Pulitzer Prize winning novelist Jhumpa Lahiri and film critic Sheila O’Malley were in the cast with me, but I guess that’s your loss! The world is exactly that wonderful. Anyway, I love the simplicity of this show, and its classical references, its love of theatre, and its gently bohemian aspirations. It is very much of its time. When I moved to New York in the late ’80s, I went to see the original production — it was still running! Though by then the original cast had long gone. When I was a kid I played the cast album of the original production, with Jerry Orbach et al.

A Funny Thing Happened on the Way to the Forum

As a junior in high school we sent to see another high school’s production of Forum in the next town over. Naturally I love this show: it fostered a life-long love both of burlesque/borscht belt and for classical comedy. It literally sent me on a journey — by the time I was 19 I had read all of Plautus, Terence, and Menander, and I still re-read them periodically, for they are the foundation. Naturally Larry Gelbart’s book is hilarious. And I would have to name this and Gypsy as my favorite Sondheim shows. (I am that much of a philistine). The record has original cast members Zero Mostel, Jack Gilford, etc. 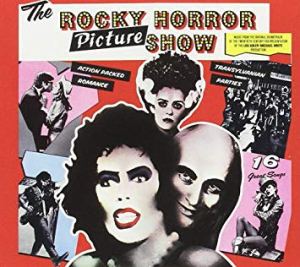 I lived in a college town and they played this film every year at the University of Rhode Island, with full audience participation/interaction, as was the fad at the time. I was 16 or 17 the first time I saw it, and wore out the grooves on the album as soon as I got it. Rocky Horror was some of my first exposure to gay camp and the concept that later became known as “the psychotronic”, a path that later brought me to my obsession with the Ridiculous.

My town library had a record of this and I took it out repeatedly. It was a rarity — a cast album of the original production from 1935, a cast that included the likes of J. Rosamond Johnson, Buck and Bubbles and Georgette Harvey. It’s unbearably tragic of course, but I have a weakness for that. Plus the genius of George Gershwin’s music, still unsurpassed. 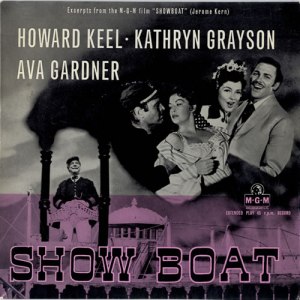 Similarly, I took this one out of the library repeatedly. Practically every song from this show is a classic. I wrote lots more about Show Boat here in my post on Edna Ferber.

I saw a college production of Threepenny Opera when I was in high school. Later, when I was about 20 and attending Trinity Rep’s conservatory, I took the album out of the library and taped it onto a cassette — that’s how you used to have to do it in those days. I was massively into early Brecht (even smoked cigars for a time in emulation of him). The 1954 Broadway revival had an incredible, legendary cast:  Lotte Lenya, Charlotte Rae, Beatrice Arthur, John Astin, and Paul Dooley, et al!

By the way, young people, just because I grew up far from Broadway and could rarely attend the real thing, doesn’t mean you can’t. Subscribe to BroadwayHD — it’s the next best thing to being there! Ask for it for your birthday — you’ll get a gold star! Enjoy Broadway Week!