Your Primer On the Great Charles Ludlam

Today is the birthday of one of my heroes, actor/manager/playwright/director/drag performer Charles Ludlam  (1943-1987). I consider it one of the great ironies of my life that I moved to NYC just a few weeks after he died, for I would have been a devotee of his company, and probably an aspirant to join it, if I’d dared attempting such a thing. Ludlam’s way of making theatre is the only way I could possibly care about, and he’s gone, and there’s no hub for it, no center for it, no National Theatre, no Comedie Francais, no aesthetic philosopher, no lightning rod. There are plenty of pretenders floating around (myself included) but you can just tell  —  we’re in the shadows of a taller giant. Even his anointed successor Everett Quinton (whom I was thrilled to get to work with last year) shook off the mantle — it weighed too much. But I did get to see several of Everett’s productions with the Ridiculous (as well as this fairly recent one), and to see the great Ethyl Eichelberger, another Ludlam acolyte, a number of times (like Ludlam, Eichelberger too was lost to AIDS, although indirectly).

The common ground, for me, anyway, is an abiding interest in classicism and a respect for comedy as an art form with a millennia-old tradition. When I was 19, strictly on my own, I was seeking out Aristophanes, Plautus, Terence, Menander, Shakespeare, Moliere. Ludlam the playwright derived his inspiration from these writers (in addition to camp sources like old Hollywood movies). I think he is our greatest comic playwright; the nation awaits a better one, at any rate.

Ludlam also revived the concept of the actor/ manager. There are so many of them running amuck nowadays in the indie theatre world that I think people absolutely take it for granted that such a thing is accepted. I assure you, when I moved here in the late 80s, few people (practically none) dared form theatre companies of which they themselves were the principal artists. At your day job, when co-workers would say, “Oh, you have a play up? What company is doing it?” and you’d say “My own!”, they’d reply, their voices dripping with condescension, “Oh, I see. A vanity production.” It was Ludlam who revived that old 19th century idea of a company devoted to its own work, a model he legitimized by pointing out that dance companies do it all the time. Most of the early off-off companies, the Living Theatre, etc, were ensemble-based.  Indeed, the Ridiculous was a different sort of company when Ludlam joined it…but in short order he formed a splinter group and transformed it into a cult of Ludlam. Even Bertolt Brecht’s son was one of its members.

For many, of course, he is a gay icon. There’s the drag of course, the pinnacle of which was his performance as Camille. For some reason, the mix of classicism and comedy has been known to attract a long line of gay writers, not only Ludlam, but Oscar Wilde, Joe Orton, and undoubtedly the ancients themselves. I, on the other hand, was once swept off my feet by a woman on the basis of her relationship to the late Ludlam (among other things). It’s almost like he was a Svengali (a role he should have played). I wish I’d been around when he was hypnotizing adherents and audiences.

I’ve just realized I haven’t given you the facts; just assumed you knew who he was. I think I will do just what your school teacher would do: send you to books.  There are three indispensable books you MUST read. 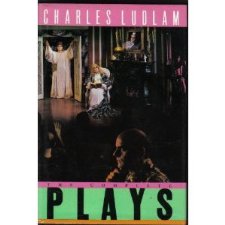 His complete body of plays, all 30 of them, from the mid 60s through the mid 80s. It is 905 pages, and a heavy thing to lug around or else my nose would be in it ALL the time. Buy it here.

Scourge of Human Folly is a book of Ludlam’s essays and utterances on the art of theatre and more, his wit and wisdom, his Poor Richard’s Almanack, his Thus Spake Zarathustra, his Analects. It is an amazing book, I think. One is not accustomed to hearing Americans (especially in the theatre) talking about art in this way: normally it’s all business, business, business. Ludlam’s mind was like that of a 18th century European. He was too good for this crappy earth. You can buy this book here. 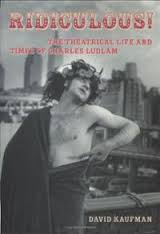 The definitive biography, by David Kaufman, is available here.

Also, he has a decent role in the Dennis Quaid-Ellen Barkin movie The Big Easy.

Lastly, something so cool I can hardly stand it. Knowing he had made some silent films, I had sought in vain to see them in preparation for my book Chain of Fools. Now  I am ecstatic to see that scenes from The Sorrows of Dolores (which he was working on at the time of his death) is available on Youtube, as is Museum of Wax, which is DOUBLY cool, because it was shot in Coney Island in the 80s! I guess you KNOW what I’ll be watching tonight. Here’s part one of Museum of Wax to get you started: