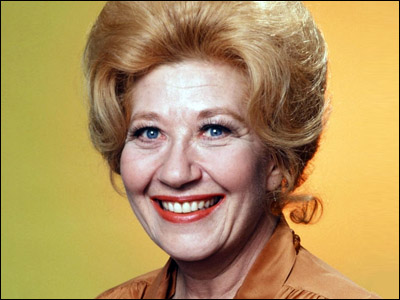 Just got the news that Charlotte Rae has died at age 92.

Later I became a fan of some her earlier work. She was Mrs. Peachum in the 1954 Broadway production of Threepenney Opera, with Lotte Lenya, Beatrice Arthur, Scott Merrill and John Astin; I played that cast album a zillion times. And on Car 54, Where Are You? (1961-63) she played Mrs. Shnauser!

Her full name was Charlotte Rae Lubotsky. Her parents were Russian Jewish immigrants who settled in Milwaukee. She attended Northwestern University, where fellow students included future coworkers Cloris Leachman and Paul Lynde and songwriter Sheldon Harnick. She sang in nightclubs when she first came to New York and appeared in numerous other Broadway shows besides Threepenny, notably the original production of Li’l Abner (1956-58), and S.J. Perelman’s The Beauty Part (1962-63).

I got to meet her once a few years ago! It was at a 2011 tribute event to Sheldon Harnick at The Players Club (I’d organized and produced a portion of the event for the now defunct Theatre Museum). Afterwards I went up to her and gushed about my fandom, and for some reason…she glowered at me as I had seldom been glowered at before. Had I given a lousy show? By her standards, undoubtedly. Was I presumptuous in coming up to her? Undeniably. Was I dressed like an ass? If I was wearing clothes, then almost certainly. But the Mad Marchioness has always claimed it was because at the time Charlotte Rae was an 85 year old lady and I had interrupted her in the chow line. If that were the case, it was a human and natural reaction I can well understand, perhaps better than most. If you interrupt ME in the chow line, I will very likely eat YOU, like a zombie. Food is life! The woman was full of life! That’s why audiences loved her. That’s why, recalling her connection to Harnick, and that she appeared in the 1959 TV film The World of Sholom Aleichem, we close by saying not something somber or serious or reflective but, “L’Chaim! To life!”