Broadway titan (playwright, lyricist, book-writer, screenwriter, author) Guy Bolton (1884-1979) deserves a shout out today. Bolton’s wit was sophisticated without being pretentious, perfectly in tune with the first third of the 20th century and yet also evergreen. Within the past five years there have been no less than two revivals of, or tributes to, his work on Broadway, just as there have been every few years. There is something about his comical concoctions that are the essence of what we think of as Broadway.

Bolton made his name contributing to the so-called Princess Theater Musicals (1915-1918), collaborations with P.G. Wodehouse and Jerome Kern that inched the Broadway musical away from the popular European operetta format which had gone before. Among these were Very Good, Eddie (1915-16 and revived 60 years later with James Harder, as we blogged here); and Oh, Boy! (1917-1918) with Marion Davies and Edna May Oliver, later made into a 1919 silent movie. With frequent collaborator Guy Middleton he devised the plot for Hit the Trail Holiday, which George M. Cohan adapted into a Broadway show in 1915, and then a (now lost) silent movie in 1918. 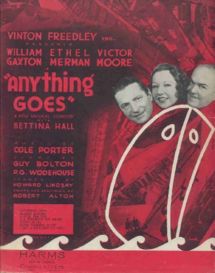 Bolton also wrote original screenplays like The Love Parade (1929), with Maurice Chevalier, Jeanette MacDonald, Lillian Roth and Lupino Lane; and the spooky thriller Chandu the Magician with Edmund Lowe and Bela Lugosi (1932). He contributed to dozens more plays, musicals and screenplays besides these, and also wrote and co-wrote several books.

Some later theatrical projects include Come on Jeeves a.k.a. Ring for Jeeves (1952), an adaptation with frequent collaborator Wodehouse of his famous fiction character for the stage; Anastasia (1954-1955), a Broadway adaptation of a French historical drama, later turned into a 1956 film, then into the 1965 musical Anya, and then into a 1967 British telefilm; and Child of Fortune, a 1956 adaptation of Henry James’ The Wings of the Dove. In the end he had been turning out popular works for audiences and readers for over half a century.