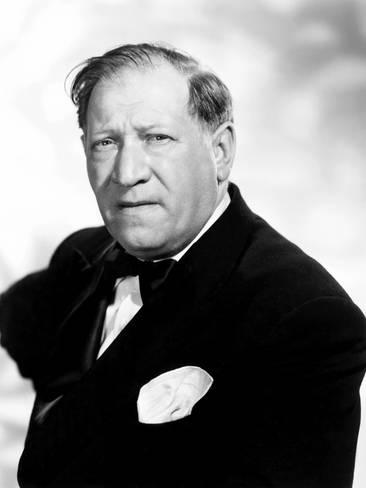 Gregory Ratoff (Grigory Vasilyevich Ratner, ca. 1893-1960) was a rarity in Hollywood: equally accomplished as both an actor and director, and also an occasional producer. He also acted and directed on Broadway.

Born in Imperial Russia, Ratoff studied law at the University of St. Petersburg, served in the Czar’s Army in World War One, and then joined the Moscow Art Theatre. After the Revolution, he fled with his family to Paris. He was performing with his future wife Eugenie Leontovich in the Revue Russe in 1922 when Lee Shubert transferred the show to Broadway. The pair remained in the States and married in 1923. Ratoff became heavily involved in New York’s Yiddish theatre scene, and appeared in a half dozen Broadway shows through 1931.

In 1932 he became a Hollywood character actor, appearing in dozens of films through the end of the decade, invariably playing a Russian or another sort of foreigner, with his unavoidably thick accent. Some notable pictures he appeared in include Gregory La Cava’s Symphony of Six Million (1932), What Price Hollywood? (1932), Kaufman and Hart’s Once in a Lifetime (1932), Mae West’s I’m No Angel (1933), Broadway Through a Keyhole (1933), and George White’s Scandals (1934). The last of this period was The Great Profile (1940) with John Barrymore.

By the mid ’30s, Ratoff also became a successful director and producer. Some of his better known films include Rose of Washington Square (1939), which starred Alice Faye as a character loosely based on Fanny Brice; the American remake of Intermezzo (1939), which introduced Ingrid Bergman to U.S. audiences; Mae West’s final studio film The Heat’s On (1943); the musical Irish Eyes are Smiling (1944); and Black Magic (1949), the Cagliostro biopic starring Orson Welles. In 1949, Ratoff and Leontovich were divorced.

In 1955 he produced, directed and starred in the film Abdulla the Great a.k.a. Abdulla’s Harem, co-starring Kay Kendall and Sydney Chaplin. He acted in the films The Sun Also Rises (1957) and Exodus (1960), and directed and produced the critically acclaimed Oscar Wilde (1960) starring Robert Morley in the title role. Gregory Ratoff’s last credit was a part in the posthumously released The Big Gamble (1961).