On Sydney Chaplin The Younger 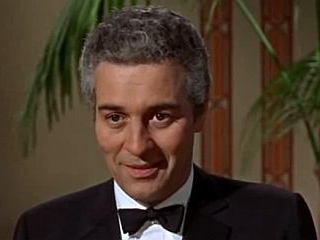 About a year ago, around the time I wrote about Michael Chaplin’s silly hippie book, I briefly entertained the notion of doing a post that would rank Charlie Chaplin’s ten children by notability. The project died aborning. Nearly all of Chaplin’s progeny are pretty interesting people; they just won’t resolve themselves into any clear order of rank. I knew the top spot belonged to either of his second or third surviving children, Sydney (1926-2009) or Geraldine (b. 1944). The oldest, Charles Chaplin Jr. (1925-1968) was a ne’er-do-well by comparison, but who could live up to that name? I’m an enormous fan of Geraldine, but there’s plenty of time for that. Today happens to be Sydney’s birthday.

Like his older brother, Sydney also had a name to live up to — he’s named after his dad’s older half-brother, mentor and business manager, a movie star in his own right. But the shadow of Sydney the First is not nearly as intimidating as that of Charlie the Second. (Not to digress and confuse, but Charles Chaplin Jr. is actually Charles Chaplin III. The famous comedian Charlie Chaplin is the ACTUAL Charles Chaplin Jr — but for the fact that he became vastly more famous than the original Charles Chaplin Sr, who seems to have gotten dropped from the count). At any rate, it can’t have been easy being ANY child of Chaplin’s attempting a career as a performer. As it was, Sydney did remarkably well for himself.

His mother was Lita Grey, also an actress, who divorced Charlie in 1927, when Sydney was still a baby. Sydney began his own professional career following his World War II service as one of the founders of the Circle Theatre (now called El Centro), along with his brother Charles Jr, William Schallert, Kathleen Freeman, et al. Sydney’s dad was an important early underwriter of their productions, which included Ethan Fromme, The Time of Your Life and Love on the Dole, along with the world premiere of William Saroyan’s Sam’s Ego House. For a time during these early years , Sydney dated Marilyn Monroe. At last! Something he could throw in his father’s face!

In 1952 Sydney played a supporting role in his dad’s movie Limelight, which led to over three dozen additional films. His early work included Act of Love (1953) with Kirk Douglas, Abdulla the Great (1955), and the 1955 Howard Hawks epic Land of the Pharaohs. In 1956 he was cast opposite Judy Holiday in the original Broadway production of Bells Are Ringing, which ran for two years, and for which he won a Tony award. (This must have marked a downward turning point for his older brother Charles, Jr. Up until this point their careers had been at least somewhat comparable. Not after this). This was followed by three short-lived shows, followed by another blockbuster: the original production of Funny Girl (1964-67) opposite Barbra Streisand, in which he created the role of Nicky Arnstein, and was again nominated for a Tony.

In the midst of that, he starred in a British film called Follow That Man (1961). In 1967 he had quite a large supporting part in his father’s last film A Countess from Hong Kong, which didn’t do anyone associated with it any favors. He continued to act for another decade but his “promising” days were over. He appeared in a couple of dozen more films, most of them foreign, a good percentage of them spaghetti westerns. He also did guest shots on American television, on shows like Police Woman, Baretta, Switch, and The Bionic Woman.

Sydney’s last two movies, So Evil My Sister (1974) and Satan’s Cheerleaders (1977) were the same sort of schlock horror films that had been his older brother’s stock in trade a decade earlier. Perhaps it was that realization which caused him to retire at a time when he was only in his early 50s. The fact that Geraldine was beginning to have success in mainstream American films by this time, and that his father passed away in 1977, may also have been factors.

After his mother died in 1995, Chaplin oversaw the preparation and publication of her memoirs, Wife of the Life of the Party, to which he added a foreword and passages of his own. When he died in 2009 he had been retired for over three decades.

For more on Charlie Chaplin, please read Chain of Fools: Silent Comedy and Its Legacies from Nickelodeons to Youtube