The Death of Charlie Chaplin

On Christmas Day, 1977, the 88 year old Charlie Chaplin skidded around his last corner. W.C. Fields had also died on Christmas. Sometimes it is Krampus and not Santa who visits us on that day.

The manner of Chaplin’s death was a stroke; he’d suffered several previous ones, and had been confined to a wheelchair for a few years by that point. Charlie thought wheelchairs were hilarious and had frequently used them for comic effect in movies like His New Profession (1914) and The Cure (1917). I know it’s immature of me but I find it ironically sad that he was too frail to make one last comedy from that wheelchair. It would have been a much more fitting send-off than his ignominious swan song A Countess from Hong Kong, released a decade earlier.

Still, that last decade had been eventful. Chaplin had returned to Hollywood in 1972 for the first time since his exile 20 years earlier; the occasion was his acceptance of an Honorary Oscar. In 1974 he released his autobiographical photo book My Life in Pictures. In 1975 he was knighted by Queen Elizabeth II, and appeared in a documentary called The Gentleman Tramp. In 1976 he composed and recorded a new score for A Woman of Paris, which was re-released that year. And during his final years, he had been developing an idea for a new film to be called The Freak, originally intended to star his daughter Victoria, about a girl born with a set of wings like an angel. Chaplin was not a guy who sat around on his hands.

1977 was a year of iconic deaths. Groucho Marx and Elvis Presley had both died a few months previously, and the tabloids were full of celebrity death stuff. In all three cases the story did not stop when the casket went in the ground. In Groucho’s case, there was high profile legal squabbling amongst his heirs about his estate. In the case of Elvis, of course, many refused to believe that he had even died. New “Elvis” sightings are reported in the tabloids until this day! But Chaplin’s posthumous career was perhaps the most spectacular of all. In March, 1978 a couple of lummoxes robbed his grave. They took the corpse and held it for ransom. But the Chaplin family were not only rich and influential but universally beloved. Police moved heaven and earth to recover the remains and nab the culprits.  In May of that year, a couple of lowlifes were arrested for the crime and Chaplin was reinterred — this time inside several feet of concrete. He rests in Corsier-sur-Vevey, Switzerland. 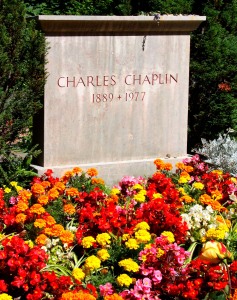