We fudge a little to include this one, but really the fudging was all Wood’s. Ostensibly an exploitation picture about the world’s first sex change operation, Wood had already adulterated the screenplay by making it an autobiographical “coming out” story about his own transvestism and angora sweater fetish. Then, on top of this, he happened to run into Bela Lugosi on the street one day and wrote him into the picture as narrator. And when you have Lugosi, you USE Lugosi, and thus the film becomes horror, or at least semi-horror, and we are repeatedly treated to scenes like this which seem to imply that God is some sort of of mad scientist who revels in making people miserable by unleashing transvestism into the world. 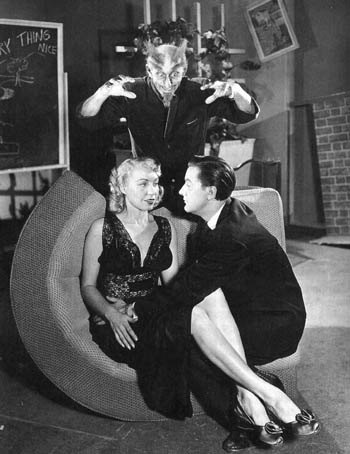 If a film features Bela Lugosi, thunder and lightning, skeletons, smoking beakers, and Satan and ISN’T horror, I don’t know what the hell it is. And– okay, no one knows what the hell Glen or Glenda is.

At least we know what Bride of the Monster is — straight-up 50s’ era horror. Now that Wood had a working relationship with Lugosi, who needed the money badly, he could build a proper Lugosi picture around him. In Bride he plays a mad scientist from some Eastern European country who now has a castle in an American swamp and conducts evil experiments on monsters, hoping to take over the world. By his side is his terrifying assistant Lobo (Swedish wrestler Tor Johnson). Unfortunately, people (like intrepid reporter Janet Lawton) keep wandering onto his property, forcing him to tie them up and scare them (before they inevitably escape). The “monster” is alternately stock footage of an octopus shot through the window of an aquarium, and an inert rubber octopus in some sort of outdoor wading pool the actors are forced to thrash around with. A much more conventional film than Glen or Glenda, it allows us to contemplate the poverty of the sets and Wood’s mind-splittingly illogical dialogue without such distractions as bizarre motives and the creation of an entirely new cinematic genre. 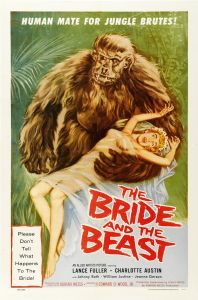 Wood only wrote this one; it was directed by Adrian Weiss, with marginally better film grammar than Wood might have brought to it. As we blogged here, ape horror was an important sub-genre. This one owes more than a little to 1952’s Bride of the Gorilla with Raymond Burr and Lon Chaney, Jr.  As in the earlier Bride it is a film that derives its suspense from the constant suggestion that a gorilla (i.e., guy in a gorilla suit) is going to rape a beautiful woman.

The crowning irony of Wood’s career (among a thousand ironies) is that for years this was his best known movie, legendary for being “the worst film of all time” — yet by certain measures, it was Wood’s best one. In the 1970s and 80s, this was the only one of his movies anyone had ever heard of or seen, and it made all kinds of critics’ “worst” lists. In Rhode Island, where I grew up, there was even a psychedelic garage band named after the film — my first exposure to it. It wasn’t until the late 1980s and early 1990s that I saw the remainder of his body of work. The irony is that, what this really means is that Plan 9 was Wood’s most SUCCESSFUL film, and from that standpoint, probably BEST, if that word has any meaning in this context. It did well enough that people SAW it, it was screened on television, and there was even a horror mask made of Tor Johnson’s character. Well you can’t say that about any of his other films, right? And among his other films, there are several candidates for worse movies than Plan 9, that’s for sure.

At any rate, surely you know the film’s sci-fi horror premise. TV psychic Criswell emerges from a coffin as narrator to give us the low-down.  Aliens from a distant planet (led by the legendary Bunny Breckinridge) have arrived on earth in to order to execute Plan 9, a means of resurrecting and animating the dead out of graveyards in order to take over the earth. Some MOS footage of the deceased Bela Lugosi makes it into the film, augmented by a body double in his role as the “dead old man”. Tor Johnson plays a police inspector who is killed and then resurrected as the film’s most iconic monster:

And local Los Angeles TV star Vampira also plays one of the monsters, apparently refusing to speak any of Wood’s crazy dialogue. 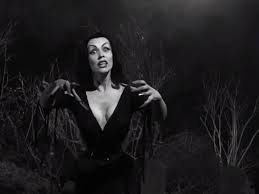 Well known tv and film star Lyle Talbot plays an army general, and the fairly well known Gregory Walcott plays the hero. The combined might of the cast gave this movie, crazy and inept as it is, a certain amount of box office juice.

This semi-sequel to Bride of the Monster provides us with an interesting mix of the old and the new. Set in Lugosi’s old house from the previous film (which had been destroyed but now has been rebuilt), the house is still home to the disfigured monster Lobo (Tor Johnson). Narrator Criswell takes us into the story. There have been strange goings-on at Willow’s Lake. People keep seeing the mysterious, beckoning “Sheila, the White Ghost” (a Vampira-esque figure played by Valda Hansen, for me one of the film’s most memorable elements). Police go to the house to investigate and find the psychic “Dr. Acula” leading seances and dealing with the living dead. This guy’s got a lot on his plate. The film ends, as always, in a great confusion. One of the special joys of this picture is, like Glen or Glenda, it contains a large proportion of irrelevant stock footage, rationalized into the story with voice-overs. Held for debts, this film went unreleased and was unseen for several decades.

I love this one so much I once produced a version of it for the stage about 15 years ago, and played a role in it. (All of these films by the way were adapted into plays by cohorts and I had the joy of acting in a couple!) Wood only wrote the screenplay for Orgy of the Dead (didn’t direct). It’s a cross between his usual horror plot and a nudie cutie. A young couple crashes their car near a graveyard, where they are tied up by the undead and clearly inebriated Criswell, a goth chick and their two lackeys, the Mummy and the Wolf Man. The monsters then force the newlyweds to watch a parade of topless strippers doing burlesque dances, each purporting to be a dead spirit being made to pay for her earthy crimes, each performing a burlesque routine with a theme that matches her sin and punishment. It’s one of the most demented things anyone has ever devised, and that’s truly saying something. 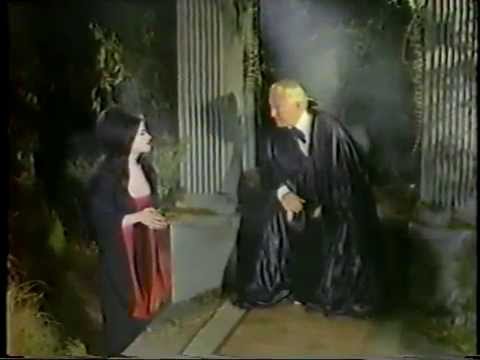