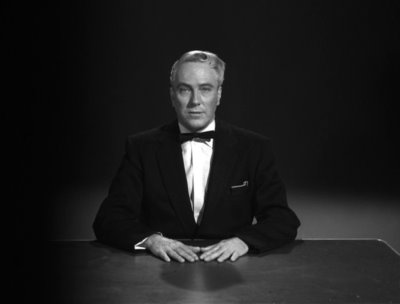 Today is the birthday of Jeron Criswell Konig (later, Jeron Criswell King, 1907-1982), the first celebrity psychic. Raised in a family of morticians, after some early work in radio and newspapers, in 1953 he began featuring predictions of the future in local ads for “Criswell Family Vitamins” on KLAC TV (Los Angeles). The spots were so popular the station gave him his own TV show called Criswell Predicts, which ran from 1953 through 1961. The show became his springboard for local fame, and he became good friends with people like Liberace, Korla Pandit, and Mae West, who wrote and sang a song about him called “Criswell Predicts” on her 1955 album The Fabulous Mae West.

Criswell’s fame was still local when notorious grade z director Ed Wood tapped him to narrate Plan 9 from Outer Space in 1956, where he fit tight into a cast that also included Tor Johnson, fellow local celebrity Vampira, and former “A list” movie stars Bela Lugosi and Lyle Talbot. The “Criswell Predicts” formatting of his appearance in the movie is in reference to his tv show. For financial reasons Plan 9 wasn’t released until 1959.

That year, he also appeared in Wood’s Night of the Ghouls, a film that, for financial reasons, wasn’t released until 1987, five years after Criswell had passed away. By 1959, the extent of Criswell’s fame was growing to national scope thanks to his syndicated newspaper items (carried by over 300 papers) and guest shots on the Tonight Show (numerous appearances between 1959 and 1970, under the reigns of both Jack Paar and Johnny Carson). He also continued to appear on Paar’s own program after he left the Tonight Show, where he famously predicted that “something” would happen to John F. Kennedy in November, 1963 that would prevent from running for re-election. Most of Criswell’s predictions were not so accurate, however. Most were too far-fetched and bizarre to ever come true — and they didn’t (the clock has long since run out on even his most forward-looking future prediction, that the end of the world would occur in 1999. Nor did Mae West ever become President of the United State, or fly to the moon on a rocket with Liberace).

In 1968 he released a book Criswell Predicts: From Now to the Year 2000. This was followed by Criswell Predicts Your Next Ten Years in 1969 and Criswell’s Forbidden Predictions: Based on Nostradumus and the Tarot in 1972. He also released a record album of himself pronouncing his premonitions in 1970. And of course, he continues to speak to us from beyond the grave on this web site: http://www.criswellpredicts.com/