Shelley Winters: From Pin-Up to Poseidon 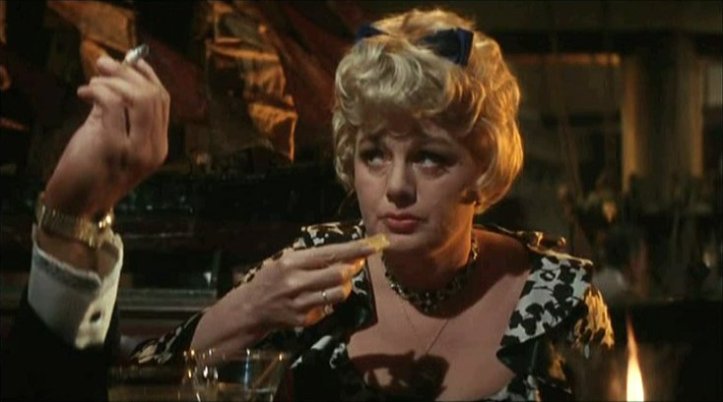 Today is the birthday of the stupendous, the colossal (quit it!) Shelley Winters (Shirley Schrift, 1920-2006).

Winters’ screen career has always held a lot of personal meaning for me, starring as she did in the first movie I ever saw in a cinema The Poseidon Adventure (1972). I’ve long considered it my second favorite film (behind The Wizard of Oz). Winter’s heroic martyrdom in the film hit me hard emotionally at the age of seven, and it still does every time I see the movie.

Unfortunately the role became sort of iconic, and it became the version of Winters that’s remained in everyone’s minds: fat, ugly, old, annoying, complaining. She even came to think of herself that way. The title of her second memoir (Shelley II) makes her sound like an ocean liner! It’s pity because when she was young and just starting out (it may surprise you to learn) she was flipping GORGEOUS. In fact when she broke into pictures her experience consisted of a handful of acting classes, some small stage roles and modelling work. It was her LOOKS (and her earthy sexiness) that got her cast. Lest ye think I exaggerate: 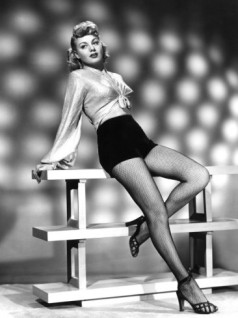 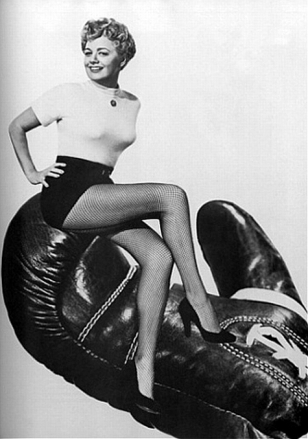 I know the Duchess will forgive me for apparently getting carried away by all this Shelley Winters cheesecake. I’m hoping to erase from your mind what you think you already know about her (while looking at legs).

But there was more to Winters than good looks; she wanted to be a serious actress. After years of playing bit parts (usually as eye candy) she took Shakespeare classes with Charles Laughton and method acting at the Actor’s Studio. Then we begin to get her starring parts, often as a sexy but hapless “other woman” or “otherwise inconvenient woman” who must die for merely existing, as she played in The Great Gatsby (1949), A Place in the Sun (1951), Night of the Hunter (1955) and Lolita (1960). She was to remain beautiful if increasingly zaftig at least through the early 60s, but what made her castable was a quality of vulnerability that could even be painful to watch. This was a quality she shared with Judy Garland and interestingly Charles Laughton, her teacher. Winters was willing to make herself ugly and embarrassing for a role, to go way out on a limb and this resulted in some truly memorable work.

Her willingness to be big in every sense of the word meant that by the 1970s she was to star in some other sorts of “classics” (in this she was no different than many another major movie star): horror and other related schlock, and so we cherish her doubly: for her true excellence…and for her…mm…zeal in acting in more…outre vehicles. This phase began with the title role in Roger Corman’s Bloody Mama (1970), in which she played lady bank robber Ma Barker; then continued with What’s the Matter with Helen (1971) by Henry Farrell, author of Whatever Happened to Baby Jane?; then Whoever Slew Auntie Roo? (1972) also directed by Curtis Harrington for AIP. In 1973 she was in The Devil’s Daughter as well as the blaxploitation flick Cleopatra Jones. In 1977, she was in the Jaws rip-off Tentacles, in which at age 57 she played a woman who was clearly meant to be about 20 years younger than herself (whose child gets eaten by a killer octopus.) In 1978 she played the housemother of a satanic sorority in The Initiation of Sarah (1978). In 1979, the disaster movie City on Fire. She was also occasionally still in good stuff. King of the Gypsies (1978) was a terrific film, although Winters didn’t get many lines. In the 90s, she got some excellent valedictory moments in Portrait of a Lady (1996) and as Roseanne’s grandmother on Roseanne, some truly brilliant stunt casting.

Over the decades, Winters also appeared on Broadway nine times, most significantly for readers of this blog creating the role of Minnie Marx in the biographical musical about the Marx Brothers Minnie’s Boys (1970) penned by Groucho’s son Arthur.