From the Borscht Belt to Seinfeld: The Evolution of Jewish American Comedy

Friedman’s work is amazing, somehow at once reverent, funny, and UNSPARINGLY realistic, with every wrinkle, blemish and liver spot faithfully rendered as if to whitewash these American monuments would be a desecration, as if even their physical imperfections were Holy. His greatest gift, over and above the faithfulness of his craft, is a unique ability to imbue his subjects with verve and life, as though he himself was performing with his pen. Look at this:

In the program we learned where that love came from. His dad the writer Bruce Jay Friedman had been a childhood habitue of the Catskills resorts where his favorite comedians were Jackie Miles and Lenny Kent. (These names were new to me, too, and among the hundreds of reasons I was glad to go to this program). As a boy, Drew attended Minnie’s Boys on Broadway and got Groucho’s autograph, and filled his Junior High School notebooks with doodles. The rest is history. Incidentally, he also did the cover art for the new Marx Brothers TV Collection that will form the centerpiece of our Marx Brothers on Television program in Marxfest on May 4. 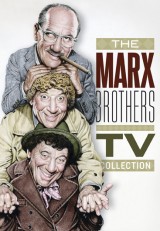 The program was led off by Edward Portnoy, Ph. D. a Rutgers professor who provided historical background on Jewish comedy and its roots in the Yiddish language.

The first speaker was the very-much-alive Larry Storch, presumably first on the bill because, at 91 years old, there was no telling WHAT would happen. (Last year there was even an internet rumor that he had died, but that was rapidly squelched by friends who knew better). If anything, Storch proved TOO full of life, telling endless off-color jokes and returning to the stage whenever he remembered another one. They were good jokes. I wrote them down to use myself!

Portnoy’s introduction for Storch was excellent. Storch, like so many others, is a victim of what might be called “Gilliganization”. Having starred for two years on the hit sit com F Troop he has spent the next half century doomed to being only “Agarn” in the eyes of most of the public. This is a fate similarly suffered by his childhood friend Don Adams, who’d grown-up on the same UWS block and had a similar career for decades (as a nightclub and television comic and impressionist) before achieving smash sit com success on Get Smart at the very same time. Storch was big in night clubs for years, decades. He’d hosted variety shows on tv. His skill set and his experience were and are broad — much broader than that one role he played for two years.

As much as Friedman’s drawings, Mr. Storch’s presentation was a lesson in the virtues of craft. The man is 91 years old.  A little shaky on his pins, but I tell you what: as long as he stuck to the script and plowed through those routines that he’s performed a zillion times over the last 70 years, he was totally fine. On a couple of occasions he thought about it too much and went up on his punchlines. But when he didn’t, the tried and the true did not let him down. Practice your art. There will be some days when it props you up rather than the other way around.

In addition to these three gents we learned TONS from two other unsung comedy heroes:

Bill Persky, who’d been a habitue of the Catskills in the Golden years and even married a Grossinger, and was a writer, producer and director on such shows as The Dick Van Dyke Show; That Girl; Good Morning World (which was Goldie Hawn’s show before Laugh-In), Lotsa Luck and Kate and Allie (among much else). His memoir My Life is a Situation Comedy came out last year.

and Tom Leopold, who started out as an actor (was a regular on The Ted Knight Show), wrote and performed on specials for Chevy Chase and Steve Allen, and later wrote and produced on Cheers, Seinfeld and Ellen. He currently writes for the British show The Kumars.