Today is the birthday of the great silent comedian Eric Campbell (1879-1917).

Campbell played the heavy in Charlie Chaplin’s best comedy shorts during the Mutual Period 1916-1917. A veteran, like Chaplin of Fred Karno’s company, the mammoth Scotsman (like Chaplin, Laurel and others) peeled off from the Karno troupe on an American tour (1914) and began working here. He appeared in stage shows of Charles Frohman and George M. Cohan before Chaplin spotted him and recognized in him the perfect ingredient to complete his comic vision.

As the heavy in the Mutual comedies, Campbell possessed the grace of a gazelle and a comic instinct to rival Chaplin’s. Big enough (6’4”, close to 300 lbs) to make Edgar Kennedy, Mack Swain or Bud Jamison seem like pipsqueaks, Campbell and his boss collaborated to make his characters as terrifying as possible, usually enhancing his impressive size with a garnish of Satanic facial hair. Campbell’s function was to torture and menace The Little Fellow in any given plot. Other than the Hero and The Girl, the heavy is the most important ingredient in any comedy cast, and Campbell proved to be the greatest Chaplin ever had. He is easily the most memorable and cherished member of any Chaplin stock company after Chaplin himself, one of his few peers, and the only one who can be said to form something like a “team” with him. 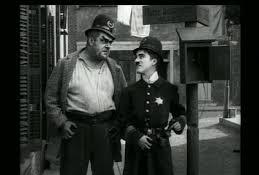 You are sensing doom, right? It gets bad, very bad.

I love the picture of the real Campbell at the top of the post. It shows what kind of guy he really was beneath the make-up, a big-hearted sweetheart. In July 1917, he lost his beloved wife, the music hall performer Fanny Gertrude Robotham to a heart attack. When their 16 year old daughter was out buying a mourning dress she was run over by a car. (She wasn’t killed but seriously mauled). When Campbell was grieving and vulnerable, a notorious gold-digger named Pearl Gilman got her hooks into him, married him and divorced him two months later. It was in the aftermath of all this that Campbell drunkenly smashed up his car and killed himself in 1917.

The loss to comedy was incalculable. To my mind the blow was even greater than that caused by the exile of Roscoe Arbuckle a few years later. Campbell was the greater artist, and laboring in the service of vastly better movies. If he’d lived….but that’s not what happened. And so we celebrate these 11 nearly-perfect movies all the more.

Which is his best performance? Tough call. The archetypal Eric Campbell turn is as the menacing waiter in The Immigrant, but his best sustained role is as the bully in Easy Street

For more on silent and slapstick comedy, including great comedy ensemble players like Eric Campbell, please check out my book: Chain of Fools: Silent Comedy and Its Legacies from Nickelodeons to Youtube