Today MAY be the birthday of Paulette Goddard. No two accounts of her early years are alike, and there is much murk surrounding her actual date of birth, her birth name and other aspects of her early life. We prefer to avoid the issue entirely; look that stuff up elsewhere.

Our main interest in Goddard of course lies in her role as onscreen and offscreen leading lady to Charlie Chaplin, and such details of her life as lead into that. Much like Mabel Normand, the beautiful Goddard began her career as a teenaged model.

In 1926 and 1927 she had a brief stage career, with chorus parts in two Ziegfeld shows, No Foolin’ and Rio Rita. There followed a brief (two year) marriage to a lumber tycoon. The generous divorce settlement allowed her to move out to Hollywood and establish herself in films. From 1929 through 1934, she played bit parts in numerous films for Hal Roach and Sam Goldwyn, mostly in comedies starring Laurel & Hardy and Eddie Cantor.

In 1934 she began dating Chaplin, who cast her as the female lead “The Gamin” in Modern Times. It seems pretty clear that his association with Godard was the first sign that he was on the road to recovery where his relations with women were concerned. Since the time of Edna Purviance in the late teens and early twenties his leading ladies and wives had been teenaged girls who popped in and out his life in a matter of months. Goddard, though twenty years younger than Chaplin, was an adult. Furthermore, she was substantial, both as a person and as an artist, possibly the only female co-star he ever had who was his equal on screen. She is a lively ball of fire in Modern Times.

In the wake of their mutual success, they continued to bond. They may have married in 1936; there has always been some doubt about their legal status. Chaplin continued to cook up other roles for her. (Among them was the original version of what became The Countess from Hong Kong, which he finally made with Sophia Loren in the role in 1966). As she waited for Chaplin to get a new film going, Goddard appeared in films by others: Young at Heart (1938), The Women (1939), and opposite Bob Hope in The Cat and the Canary (1939). She also came close to winning the part of Scarlet O’Hara in Gone with the Wind. Finally, her second film with Chaplin The Great Dictator was released in 1940. Though this too was a hit, Goddard grew tired of playing second fiddle to Charlie’s work and the two finally broke up in 1942. She went on to a productive film and television career lasting three more decades, the only one of Chaplin’s female “discoveries” to have done so (although, none of the others had ALSO been discovered by Ziegfeld, Roach, Goldwyn and David O. Selznick). After Chaplin, she married Burgess Meredith (1944-1949) and Erich Maria Remarque, author of All Quiet on the Western Front (1958-1970). In later years, her frequent date was this guy: 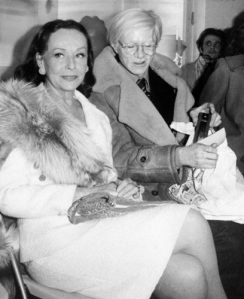 For more on silent and slapstick comedy, including Paulette Goddard’s films with Chaplin, please check out my book: Chain of Fools: Silent Comedy and Its Legacies from Nickelodeons to Youtube, just released by Bear Manor Media, also available from amazon.com etc etc etc