Happy Columbus Day! And what better way to observe it here than by a little piece on the World’s Columbian Exposition, a.k.a., the Chicago World’s Fair of 1893? (Wait! Come back!) 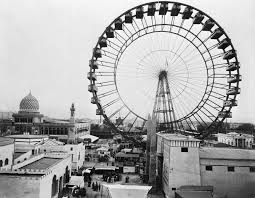 Designed to celebrate the quatercentenary of Columbus’s first voyage to America (they were a year late), it was the largest such exposition ever mounted up until that time (my post on most of them is here). Countless “firsts” date from the Chicago fair. Most pervasively, the entire grounds were lit by Thomas Edison’s lightbulbs, powered by Nikolai Tesla’s generators — a revelation to the masses at that time. Eadwaeard Muybridge presented his pre-cursor to the motion picture camera there. The first Ferris Wheel went up. Frederick Jackson Turner gave his famous lecture on the closing of the American frontier. Juicy Fruit gum, Quaker Oats, Cream of Wheat, Shredded wheat and Hershey Chocolate were all offered for the first time. And Aunt Jemima, the stereotyped pancake and syrup mascot — later to be played in vaudeville by Tess Gardella — was first introduced

More germane to these annals, Buffalo Bill’s Wild West (denied entry to the fair) was held next door, and an exhibition of Hawaiian hula dancers performed at the fair. (I really wish I’d known about the latter fact when I wrote No Applause; this exhibition fed directly into the popularization of the ukulele, which is not a little relevant to the study of vaudeville.)

Another of the acts on view there was Eugene Sandow, Ziegfeld’s strongman. (The success of this exhibition was what led to the later more ambitious tour of his Trocadero Vaudevilles). Outfitted in Roman garb and compared by his promoter to anything from the gladiators of old to Hercules himself, in addition to his feats of strength, Sandow was on deck to showcase his muscles themselves, flexing, preening, making his muscles “dance.” Before and after the performances, titillated females were allowed to approach the hulking specimen of German manhood and feel his rippling muscles. To prove that they were real, you understand. A 1902 review of Sandow’s act in the New York Dramatic Mirror said of the act that “if [it had been] attempted by any woman, [it] would be promptly suppressed.”

As in the dime museums and the medicine shows, science was providing a useful rationale for the display of human flesh. Sandow’s act was billed as the “Greatest Physical Lesson of the Age.”  The physical culture angle was one that many vaudevillians would exploit. Athletics required freedom of movement which in turn required near nakedness. Acrobats appeared in miniscule outfits named after the original “Man on the Flying Trapeze”, the French aerial artiste known as Leotard.

Across the Midway Plaisance from the Sandow exhibition, you could encounter a still more explicit diversion at a pavilion known as “The Streets of Cairo”. There, a dancer known as Little Egypt clad in harem pants and a sheer top that left her midriff exposed, did a sexy, snake-like dance, wiggling her abdomen and writhing her arms whilst beguiling the male patrons with a look of “come hither”. Initially presented with an anthropological rationale, the exhibition’s baser charms became its selling point almost instantly, much as an issue of National Geographic in the hands of an adolescent becomes pornography. Her act, which raised the brows of many, became known variously as the “belly dance”, the “cooch dance” or the “hootchy cootchy”. By the following year it had become a national craze, with scores of Little Egypts to be found in carnivals, dime museums, and amusement parks all over the country.

Just as Sandow and Little Egypt had introduced sex appeal to visitors at the ’93 World’s Fair, a third seminal display would have similar repercussions, although in a more roundabout way. For at that historical exposition there occurred the first major demonstration of a new type of music known as ragtime. The process of “ragging” or syncopating a tune had been common among African American musicians for decades. In the years of Reconstruction, many gained their first access to pianos and serious musical training, and experimenting with their “broken” or “ragged” rhythms on that instrument.

Juxtaposing an “oom-pah” bass line derived from the German march (the most popular instrumental music of the day), with a melody in a completely different beat, the music was at once intricate and sophisticated, but also free-spirited and strangely intoxicating. It’s foremost proponent Scott Joplin performed in minstrelsy and vaudeville, but disliked it; he had more serious ambitions as a composer.

It is to the Chicago World’s Fair, as well, that we owe the existence of vaudeville’s worst act The Cherry Sisters, who devised their act originally to raise funds so they could travel to the fair from their native Iowa.  And Martin Beck earned his nickname “Two Beers Beck” by working as a waiter at a Chicago beergarden at the time of the fair, before hooking up with Schiller’s Vaudeville Company…..which brought him to San Francisco and his destiny as one of vaudeville’s greatest managers.

And to find out more about the history of show business, consult No Applause, Just Throw Money: The Book That Made Vaudeville Famous, available at Amazon, Barnes and Noble, and wherever nutty books are sold.