Of Buffalo Bill Cody and His “Wild West” 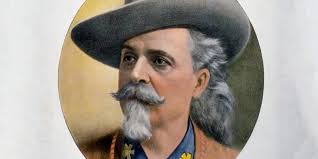 William Frederick “Buffalo Bill” Cody (born this day in 1846) was one of the greatest showmen of all time, second only perhaps to P.T. Barnum. He of course held many jobs before he went into show business: Indian scout, buffalo hunter, Pony Express rider, Union soldier, gold miner, etc etc, etc, but our main concern here is what he did in front of audiences.

In 1872, under the management of Ned Buntline (who’d previously enhanced his fame with a series of popular dime novels), Cody starred in a number of melodrama plays reenacting his western adventures, often co-starring the likes of Texas Jack Omohundro and Wild Bill Hickok. In 1883 he founded Buffalo Bill’s Wild West (to reinforce the feeling of realism in his entertainments he omitted the word “show” from its title. The large scale spectacle had elements of circus, rodeo, sideshow, and the Hollywood westerns that were to borrow so heavily from the staging of its reenactments of events like Custer’s Last Stand. 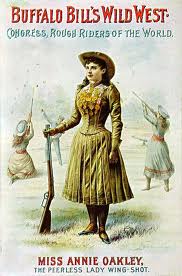 Sharpshooters Annie Oakley and Frank Butler (subjects, along with Cody, of the Irving Berlin musical Annie Get Your Gun) were among his famous performers, as was Sioux Chieftain Sitting Bull. A 1887 trip to London inspired Alan Moore to include Buffalo Bill’s “savages” among the suspects in his Jack the Ripper graphic novel From Hell. In 1893, he pitched his show outside the Chicago World’s Fair, having been denied participation in the fair itself. He drew as many customers as the fair did. It was this incarnation of the show that inspired young Chicago native Flo Ziegfeld to go into show business. Buffalo Bill later merged his show with that of Pawnee Bill; the concern went bankrupt in 1908. Cody passed away in 1917, long enough to have appeared in several films as himself. 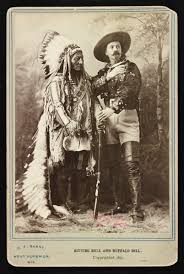 But his legacies were many. There’s the town of Cody, Wyoming, which believe it or not is one of the places I went on my honeymoon! This is also the site of the Buffalo Bill Historical Center, one of my favorite museums in the world. In the movies he was played by Joel McCrea in the 1944 William Wellman bio-pic Buffalo Bill, Louis Calhern in Annie Get Your Gun (1956), and Paul Newman in Robert Altman’s Buffalo Bill and the Indians (1976), based on Arthur Kopit’s play.

And there is a direct link to vaudeville. In the wake of the success of Buffalo Bill’s Wild West, countless imitators sprang up, among them Texas Jack and Colonel Zack Mulhall, both of whom employed a young rope twirler by the name of Will Rogers. He traveled with Mulhall’s outfit to New York City in 1905, and ended up staying, and bringing his talents to Keith’s Union Square, becoming one of the great vaudeville stars of the era. See here also for posts on wild west shows, and Indian medicine shows.

To find out more about the history of American show business, please consult my critically acclaimed book No Applause, Just Throw Money: The Book That Made Vaudeville Famous, available at Amazon, Barnes and Noble, and many other fine establishments.