On the 11th Hour Success of The Del Rubio Triplets

There were three singing Del Rubio Triplets: Eadie (Edith) Boyd, Elena Boyd and Millie (Mildred) Boyd, all born in the Panama Canal Zone on August 23, 1921. Edith was named after the girls’ great aunt Edith Bolling Wilson, First Lady of the United States. . The girls moved to Washington DC during their childhood and grew up there.

The three began performing in nightclubs during the 1940s, billed as the Boyd Sisters. Aside from the impressive fact that they were triplets, all three of the sisters played guitar, which in and of itself was a memorable gimmick for such an act (as the repertoire was naturally standards.) This skill was useful when they were cast in two musical westerns: Hands Across the Border (1944) with Roy Rogers, and Smoky River Serenade (1947) with Big Boy Williams. They sang with Xavier Cugat’s band for a time. At some point they began dying their hair blonde and rebranded themselves the Del Rubio Triplets (“rubio” is Spanish for blonde). During the first phase of their career they got some guest shots on the tv variety programs of Bob Hope and Red Skelton, and that was as high as they rose, initially. 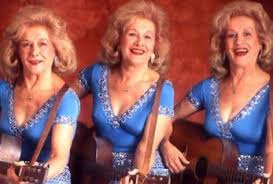 By the 1980s, however, the Del Rubio Triplets got an unprecedented surge in popularity. The fact that they were getting on in years and that there were few such acts left, plus the stubbornly retro AESTHETICS of their act, now gave them the added gloss of camp, and they simply went with it. (One of their first appearances of this type was in the 1979 satire Americathon).  From the late ’80s through the mid ’90s you could see them on Peewee’s Playhouse, Married…with Children, The Golden Girls, Night Court, and other tv shows. Eadie died in 1996, sadly ending this final time in the sun. Elena passed in 2001, Millie in 2011.

To learn more about show biz history,  please read my book No Applause, Just Throw Money: The Book That Made Vaudeville Famous,