Inez Courtney: From Mosquito to Marchesa 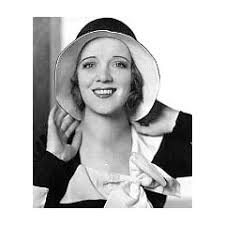 Courtney, a redheaded Irish-American colleen, started her working life as a shopgirl (an apprentice milliner, to be precise). At age sixteen she went on the vaudeville stage as a dancer, where her energetic antics inspired the nicknames “Mosquito” and “St. Vitus”. Her first Broadway job was a part in the chorus of The Little Whopper (1919-20). In her next show, Blue Eyes (1921), she got a specialty dance, followed by Snapshots of 1921. With The Wild Rose (1926), she got her first Broadway speaking role, alongside William Collier, Joseph Santley, Gus Shy and Dink Trout. In her next show Good News (1927-29) she was paired again with Gus Shy and got to dance two specialty numbers with him. Next came Polly (1929) with Fred Allen.

After this she retired to Rome to live as the wife of the Marchese Luigi Filiesi, a noble Italian wine merchant. By the time of her death in 1975, she was living in New Jersey.

To learn about the history of vaudeville, and vaudeville veterans like Inez Courtney, please see No Applause, Just Throw Money: The Book That Made Vaudeville Famous.