On Some Fallen Comedy Heroes

The Conners, i.e., the Roseanneless Roseanne, premiers on ABC tonight. It seems a savvy and even a just move, and even a fitting punishment for the banished one herself, given that the show’s genesis (it was created by Matt Williams) predated her involvement, though she instantly took it over, as she is wont to do. The real sting for her will come from seeing that, not only will the show do just fine without her, but with this sterling ensemble in place, improve. Early reviews are hinting that this is indeed the case. Like some sort of junkie, Roseanne is going to be forced to watch her baby being tended by someone else and thriving in the bargain.

When the reboot premiered, I posted a couple of pieces in support of the concept. All around me were raging against it with a Jacobin vehemence. I take a back seat to nobody when it comes to my hatred and scorn for the current “President” (quotation marks earned by the illegitimacy of the 2016 election), but I did (and do) think it was important for television to acknowledge what’s going on in the country and broker some sort of dialogue between the two intractable halves. Never mind the wall Trump wants to build; he’s already built one — right through the middle of America. I have a long list of people I never talk to anymore, won’t talk to anymore. Products I won’t buy. Thanks to Roseanne’s shockingly ugly Valerie Jarrett comment, her new show became one of them. So I took those couple of posts down.

By default I am in too angry a place these days to have felt a great deal of sadness or disappointment about it, nor was I ever under any illusions about her. Roseanne has made a career out of saying outrageous things. But I had been unaware of how she had changed in recent years. I knew her as the most powerful woman in television since Lucy, a working class hero, and even a feminist hero — that’s how my feminist wife encouraged me to think of her. My wife had been a fan of the show when it originally ran. I’d only seen it sporadically at the time. Inspired by news of the reboot, (and the fact that I’d gotten to know one of the stars Lecy Goranson casually ever since she did a play at the Brick years ago), last year I binge watched the whole original series (1988-1996) — quite a roller coaster ride, ranging from kitchen-sink realism to (towards the end) bizarre fantasy worthy of Gilligan’s Island. Since Roseanne had the racist gall to compare Jarret to the characters in Planet of the Apes, I am more than comfortable calling Roseanne King Kong — she left a sizeable footprint.

And what do you do precisely with an important body of work after you learn the artist is a monster? Not just flawed — they’re all flawed, we’re all flawed. But what if someone reveals themselves to be rotten at the core? You reassess. You consume warily, guardedly. You maintain perspective. And yes boycott. I wasn’t going to boycott her peremptorily, pre-emptively, as so many were willing to do this time around. I am OF the people Roseanne represented on her show. I looked at Roseanne and saw something like my life. Construction contracting, working in factories and diners and stores at the mall, repairing motorcycles — those are the sort of jobs the grown-ups around me did when I was a kid. And as with Darlene and Becky, college was not a given for me, it was a sort of far-away dream, an attainable one but only as the result of climbing a very steep mountain with weights on your legs. And the original show was consistently excellent, in writing and acting, direction etc. So I gave the new show a chance, and then the star showed her true colors, and now I won’t bother with the woman herself…much as I hadn’t bothered with her all that much back in the day, the first time around. And thanks a lot, Roseanne, it’s not like the world has countless independent working class female heroes who reach the pinnacle of fame and fortune. You blew it, not just for yourself, but for others who were inspired by your example.

But you know what? It’s not like Roseanne was the ONLY or even the first working class sitcom ever on television. The list is much longer than you think. And further, as has been pointed out in the middle of this MAGA mishigas, since when does “working class” mean “white working class”? For example, consider another ’90s sitcom I really, really loved, Roc (1991-1994), about a black working class family (Charles S. Dutton was a garbageman). We wrote about that show here.

And that’s a perfect pivot point for another major fall from grace, and this one is much more painful to me, harder for me to deal with than nearly any other similar betrayal. For this happened recently, too: 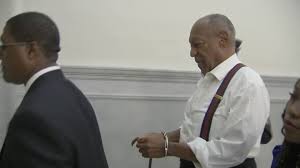 That sight hurts. He more than deserves it, though. I’ll go farther, he deserves more than 3-10 years, he deserves never to see the light of day again given the scale of his crimes. But according to the law, the clock has run out on most of Cosby’s known misdeeds (the law ought to be rewritten). And Cosby’s old, he may well die in jail. And that would be justice.

But his case, like Roseanne’s, brings up a troubling problem, one that says something about humankind that’s not pretty. Mass behavior is as blunt as a war club. Cosby was a beloved figure, entrenched in the hearts of millions, admired for his contributions, a philanthropist, a pioneer, an extremely productive member of society, and even a teacher. He was already a rich and famous entertainer when he went back and got a doctorate in education — that’s how much he values it. He was an African American whom millions of Americans of all colors looked up to, helping bridge, more than most, an enormous gulf. Unlike so many other celebrities, his place in the public imagination wasn’t just some irrational myth, or so it seemed anyway. So it took forever for the boom to be lowered. Press and public alike would not listen to the more than plausible claims that were being made against him. His celebrity was an impenetrable monolith. THEN, when it all properly broke, and the story garnered headline after headline after headline, the situation turned 180 degrees and he became a pariah. His notoriety is now the monolith, and his contributions are never spoken of. It is as though there has been a rip in the time-space continuum. It’s not like the contributions weren’t made. But we can’t speak of them, not now anyway. To speak of them would seem to be like condoning mass rape. Of course, it wouldn’t be that, at least needn’t be that. The man was both things, both simultaneously. He did good things and he did unspeakably evil things. And when I say Cosby did good things, this is not like Hitler petting a German Shepherd. This is nothing minor. He positively impacted American culture in a huge way.

It is natural to take Cosby’s betrayal personally, and I do. I had several starry-eyed posts about him on this site, and not only did I remove them, but it’s likely I’ll never watch any of his shows ever again. That’s what it is to be a pariah. I mentally feel I can’t reward him in any way after what he did to all those women. But at some point in the distant future, for the sake of history if for no other reason, critics or scholars or general audiences will need to look at his shows, or Roseanne’s, and parse it out, and say, rationally, “This person achieved X, and yet also did Z.” It is a hard thing, and we are only just learning to do it. Very few seem to have mastered it. Humans want to be “all hate” or “all love”, and they easily comprehend a gestalt of heroes and villains and nothing subtler. Yet, Thomas Jefferson and Martin Luther King, to give just two examples of saints with secrets, provide a compelling case for why we need to cultivate an ability to either compartmentalize or integrate the disparate, apparently irreconcilable pieces and draw for ourselves complete pictures of complicated individuals. Roseanne and Cosby are part of the history of popular culture. At the moment, we’re writing them out. But if we’re not to live in Orwell’s 1984, at some point, guardedly and without bowdlerization, they’ll need to be written back in.