The Fires of Coney Island

Fire Prevention Week begins today. Any study of history is to become aware of the frequency and the severity of fires in human existence prior to modern regulations and fire prevention methods. Even with them, we still get devastating blazes from time to time, but not as often as in the years prior to the late 20th century. And by definition, such fires are catastrophes — they change the character of a place; they alter history. No type of building was immune. I’ve got more posts planned on famous fire disasters as they relate to the usual themes of this blog (theatre and entertainment history). But I thought I would start today by talking about one particular district that was hit repeatedly by conflagrations over the decades, always with major consequences.  I speak of course of the amusement district of Coney Island.

Here are some major fires from Coney’s past. I have left out dozens, perhaps scores of minor ones, where individual hotels, saloons or other buildings burned down but it didn’t spread — that number could well be in the hundreds. But here are some significant ones:

Coney Island was already a leisure destination, but not yet a home to amusement parks when the Elephant Hotel was built in 1885. It burned down in 1896, just on the eve of the amusement revolution. Learn about the popular structure on my earlier article here.

The Bowery (named after Manhattan’s eponymous street) was a strip of saloons, restaurants, dance halls, hotels, and later nickelodeons, arcades and the like. It’s history preceded the amusement district, but later became part of it. According to historian Cezar Del Valle, a fire began at at the Albatross Hotel in 1903, started by a “drunken freak” during the off-season. Henderson’s Theatre, Stauch’s Dance Hall, Cheyenne Joe’s Wild West Tavern and a Thompson and Dundy ride named Darkness and Dawn were all burned down, but the rest of Luna Park, and nearby Steeplechase Park were saved by quick-acting staff.  In the future, neither park would be so lucky.

Most of Steeplechase Park, the oldest of the major Coney Island amusement parks (established 1897) was destroyed by fire. The reaction of its founder George C. Tilyou, has become notorious in the annals of show business. The rubble had not even stopped smoking when he posted a sign with this message:

To enquiring friends: I have troubles today that I had not yesterday. I had troubles yesterday which I have not today. On this site will be built a bigger, better, Steeplechase Park. Admission to the burning ruins — Ten cents.

Dreamland was the youngest of the three major parks from Coney’s great age (opened 1904). The conflagration was started by workmen preparing the Hell Hate ride for the new summer season. Dreamland’s destruction ended Coney’s very short heyday of three fabulous amusement parks operating simultaneously. The cloud has a silver lining, though. On its site, Samuel Gumpertz opened Dreamland Circus Sideshow, probably the greatest of all Coney Island sideshows, which operated until 1929.

A particularly sad event, for it finished a New York amusement institution which had actually antedated Coney Island. The Eden Musee (a wax museum and multipurpose venue) originally operated on 23rd Street in the neighborhood around Madison Square and was founded in 1884. Following a bankruptcy in 1915, its most popular exhibits (including a Chamber of Horrors) were moved to Coney, helping to fill the void left by Dreamland. In 1928, that too burned — and if you’ve seen House of Wax, you probably have a vivid picture in your head of what that looked like.

Steeplechase suffered two more terrible fires in the 1930s, though neither proved fatal to that hearty institution at the time. Ironically, the burning down of its main competition a few years later ultimately did. To wit: 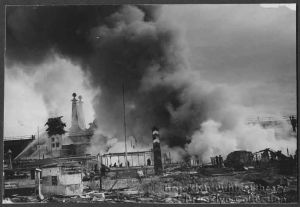 The burning of Thompson and Dundy’s Luna Park (founded 1903) is probably the single greatest catastrophic turning point in Coney Island’s history. The park had already been experiencing financial difficulties at the time. When disaster struck, the owners opted not to rebuild. Its site was rezoned and public housing went up on the spot, effectively cutting Coney Island’s amusement area in half. Steeplechase Park and certain independent, smaller operators were all that remained. Ironically that hurt attendance at Steeplechase, for Coney Island itself now became less attractive as a destination. Steeplechase soldiered on for another two decades, finally closing in 1964.