It’s Elephant Appreciation Day, a perfect occasion to reflect upon that bygone architectural oddity, the elephant-shaped hotel/ observation statue. There were four of them I know of, all of them famous landmarks (in their own time and long afterward). Philadelphia-born inventor and developer James V. Lafferty (1856-1898) came up with the concept and patented it. He may have been inspired by some unrealized French projects:

This monument was envisioned by Paris architect Charles Ribart to go at the end of the Champs-Élysées where the Arc de Triomphe was eventually built. As you can see, there were chambers inside, and stairs. He envisioned air vents and plumbing as part of its design. Ribart pitched this in 1758, but the government was uninterested in funding it. I guess they thought it was pork. But this was an elephant, not a pig!

The Elephant of the Bastille

Napoleon came up with the idea of the Elephant of the Bastille in 1808. The Fountain of Regeneration had been built in 1793 on the site of the former Bastille prison. Napoleon wanted an enormous bronze elephant placed there, made of captured and melted Russian guns from the Battle of Friedland. He envisioned stairs leading to an observation deck on the top. His decree went forth in 1811. A full scale plaster model was erected in 1814 to show what the finished product would look like. But of course, Waterloo was in 1815. The plaster cast remained standing until 1846. Victor Hugo set a famous scene there in his 1862 novel Les Misérables.

Possibly inspired by these earlier French abortions, in 1881, Lafferty unveiled his first such creation: 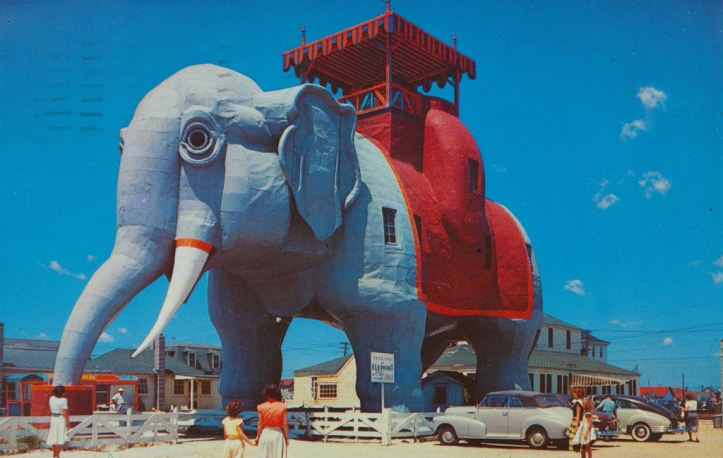 Elephant Bazaar, a.k.a. Lucy the Elephant

Perhaps you’ve seen her, as she is the only one of the elephant shaped structures to last to the present day. She is located in Margate City NJ, on the outskirts of Atlantic City. Lucy is six stories tall, with spiral staircases in her legs. She is the oldest roadside attraction in America, and the 11th tallest statue in the U.S. Lafferty hoped to attract tourists and real estate buyers to the area with his elephant building, but he was ahead of his time. He was forced to sell the building in 1887.

Elephantine Colossus a.k.a The Elephant Hotel

In 1885, Lafferty built his second such structure, this time a seven story hotel right in the heart of Coney Island. The hotel had a ballroom, 31 hotel rooms, an amusement arcade, and, in one of the legs, a cigar store. After its debut as a hotel, a roller coaster was built around its exterior. The hotel rapidly ran down and became known as a popular spot for assignations with prostitutes. It burned down in 1896. 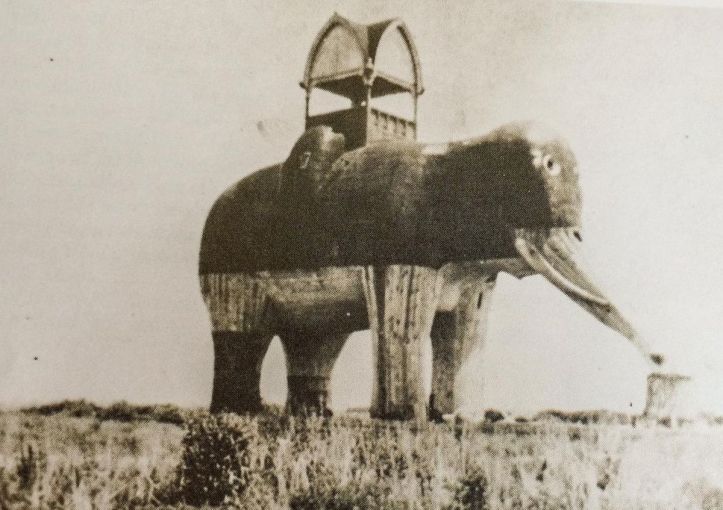 A man named Theodore Reger purchased the rights from Lafferty to build his own version of the Elephant Bazaar in Cape May, New Jersey. It opened for business in 1885. That was the same year P.T. Barnum’s pachyderm star Jumbo was killed in an accident; the building was nicknamed in her honor. Like Lucy, the Light of Asia failed to attract the desired tourist business. What was left of it after years of disuse burned down in 1900.

This structure, clearly inspired by Lafferty’s buildings as well as the Elephant of the Bastille, but realized with a great deal more verisimilitude, was erected in a garden near the Moulin Rouge in 1889. It was torn down in 1906. You can see it referenced in the 2001 musical film Moulin Rouge!

And then, almost as suddenly as it came into being, this mania to build pachyderm shaped buildings faded away. Who can say why these things happen? And why Paris and America? Why not, London, for example, which had an actual Empire in South Asia? I for one would like MORE animals shaped like buildings. In an architecture class I took (for some reason) in high school, I designed a building shaped like a duck. It was one of the few “D” marks I ever received, so I clearly don’t have all the answers.

I am also curious about the early death of Mr. Lafferty. He was only 42 when he died, and it seems like most of his schemes came to naught. Did these elephantine dreams break him, as dreams that are too big will do?