Thompson and Dundy: From Fairgrounds to Coney Island to Broadway

There’s a case to be made for Thompson and Dundy — that is, Fred Thompson and Skip Dundy — being the greatest showmen of all time. There are other contenders of course and no doubt you know their names, but these two gentlemen are certainly on the short list for a spirited debate.

Fredric Thompson was appropriately born on Halloween, 1872 in Ironton, Pennsylvania. He learned architectural draftsmanship from his uncle and also studied at the Ecoles des Beaux Arts in Paris. He was a manager of exhibits at the World’s Columbian Exposition in Chicago in 1893 and designed structures for the Tennessee Centennial Exposition in Nashville in 1897.

In 1898 he went to Omaha for the Trans-Mississippi Exposition, where he met Elmer Scipio “Skip” Dundy, Jr. Dundy’s father was an important local judge. As a boy the the younger Dundy had been regaled with talk of show biz by Buffalo Bill Cody, a frequent visitor in the Dundy home. Dundy would grow to be be the backer and business man of the storied Thompson and Dundy partnership. 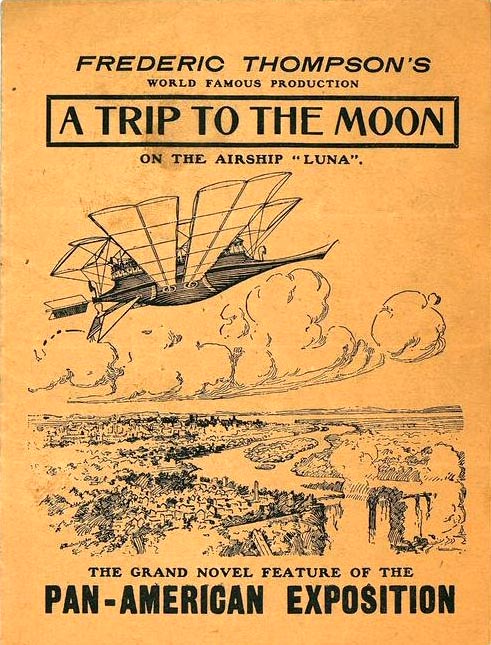 Together, they introduced several attractions at the Pan-American Exposition in Buffalo in 1901, the most remarkable of which was Thompson’s Jules Verne-inspired ride “A Trip to the Moon.” The ride used moving cycloramas, electric lights, and a moving “ships”: to simulate a journey on a rocket. When they arrived as their lunar destination, a cast of costumed Little People portrayed moon men. The ride was the sensation of the fair. Thompson and Dundee also operated other attractions there, including “Heaven and Hell,” the “Giant See-Saw”, the “Old Plantation” et al. The two men walked away from the fair rich in capital.

The following summer, in 1902, they operated “A Trip to the Moon” at George C. Tilyou’s Steeplechase Park in Coney Island. Again, the ride was a smash. When Tilyou asked for a larger share of the profits, they literally took their act to the other side of the street, to the north side of Surf Avenue, which at that time was home to Paul Boyton’s Sea Lion Park. Boyton was discouraged by a bad season, so he leased his land to Thompson and Dundy, who transformed his relatively rude, ramshackle enclosure into the greatest amusement park in the world: Luna Park.

Luna Park opened in 1903, retaining some elements of Sea Lion Park, such as the famous lagoon and the Shoot the Chutes ride. But Thompson transformed it into a it was a veritable fantasia, full of castle-like towers and Orientalist Minarets. 250,00 electric lights, a new record, made the park look even more spectacular at night. In addition to The Trip to the Moon, there was a ride called “20,000 Leagues Under the Sea”, a simulated submarine ride, which brought you to the Arctic with real floating icebergs, seals, polar bear and Eskimos. There was a Venice attraction with canal and gondolas. There was a miniature railroad that took you to fairyland, simulated tenement fire attraction, Wormwood’s Trained Monkey Theatre, Hagenbeck’s Wild Animals, and a good deal more.

The next year a consortium of businessmen opened a new park that borrowed many of Luna Park’s innovations and built them on an even larger scale, calling their new park Dreamland. Rather than competition, the new park seemed to add to the general attractiveness of Coney Island as a whole as a destination. The three great parks: Steeplechase, Luna Park and Dreamland, added up to  an unimaginable wonderland. You could never experience everything there was to see and do at Coney Island in a single outing. That was to remain the case until 1911, when Dreamland burned up in a fire.

In 1905, Thompson and Dundy expanded yet again, this time in the heart of Manhattan. Their new innovation was the Hippodrome, the largest Broadway theatre in history. The “Hip” could accommodate 4,678 audience members. The stage was 200 feet wide and 110 feet deep. It was on a hydraulic lift so it could be move as needed. It could also be lowered into a pit and filled with water for the staging of aquatic ballets, naval re-enactments, and the like. Thompson hadn’t designed this theatre. He and Dundy were brought in to manage it and produce the spectacles. Their initial outing was A Yankee Circus on Mars (1905), a musical extravaganza that delivered to the audience just what they paid tickets to see: a circus that took place on the planet Mars. Their follow-up, A Society Circus (1905-06) played nearly a year. Though well attended, these shows were expensive and failed to turn a profit. Thompson and Dundy were pushed out of the Hippodrome. They produced one more show as a team, the original production of Brewster’s Millions (1906) at the New Amsterdam. Dundy died of pneumonia in 1907.

Nothing daunted Thompson plugged on as an impresario on the main stem, no doubt egged on my his new wife Broadway actress Mabel Taliaferro, sister of Edith, whom he’d married in 1906. He produced and designed 8 more Broadway shows through 1910, including Polly of the Circus (1907-1908), A Fool There Was (1909) and My Man (1910). Many of his shows had starred Taliaferro, but the pair split up in 1911. That year Taliaferro filmed her first movie, the Selig Polyscope version of Cinderella. She would continue acting on stage and screen until the 1950s. 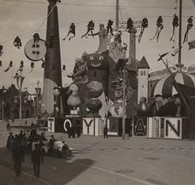 Thompson was not so fortunate. Creditors took possession of Luna Park in 1912, although he continued to manage it for a time. In 1915 he designed and built an attraction called Toyland at the Panama-Pacific International Exposition in San Francisco.  But Thompson was sickly. He began undergoing a series of operations for his health in 1915. The last one, in 1919, killed him.

In the 1920s and ’30s Luna Park underwent a series of financial set-backs and bankruptcies. After a fire in 1944, the owners chose not to rebuild it. For the next 20 years, Steeplechase Park, the last of the three great parks, held the fort at Coney Island. The Hippodrome was torn down in 1939. Thompson, who’d taken millions of people to new worlds of his own devising, had essentially been wiped off the map. Oh, except for this office building at the site of the former Hip. But it’s even money no one, not even the people who work there, know the origin of the building’s name: