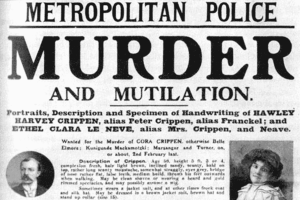 Like yesterday’s post on Elsa Schiaparelli and the upcoming series on Agatha Christie,this is a post that might have been better left in the hands of Carolyn Raship, the “lead investigator” as it were in our house when it comes to famous murders. But this time, I got selfish, and had to hog a good story all to myself. Also, I happen to be playing an evil quack at the moment — I’m in the right head space.

This is a famous British case involving an American couple. The villain of the piece is Dr. Hawley Harvey Crippen (1862-1910). You’ll find many reproductions of his photo on the internet, for how could a guy with this face not be a murderer?: 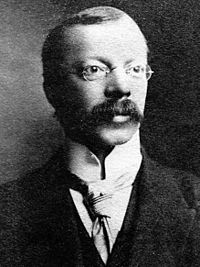 Crippen was a credentialed homoepathic doctor, ear and eye specialist, and patent medicine dealer from Michigan. In 1894, he was a widower practicing in New York, when he met and married a vaudeville and music hall singer named Corrine “Cora” Turner, born Kunigunde Mackamotski, stage name Belle Elmore. This is her:

That same year of 1894 Crippen became a dealer for Dr. Munyon’s Homeopathic Remedies. At the same time, Crippen appears to have been managing his wife’s career.

In 1897 the pair moved to London. There, the couple’s circumstances changed somewhat. Crippen’s American credentials did not permit him to practice in England as a doctor. He was merely selling patent medicine and managing Cora’s career. Cora made lots of friends in the music hall world. In 1899, Crippen was let go from Dr. Munyon’s for spending too much on Cora’s career. He next became the head of Drouet’s Institution for the Deaf. It is there that he met a pretty young typist named Ethel La Neve, with whom he began having an affair by 1905. (On this particular score don’t judge him too harshly. Cora had flagrantly had MANY extramarital affairs from the beginning of their marriage, including at least one with one of the lodgers at the rooming house they operated to supplement their otherwise small income. )

But you might be perhaps forgiven for judging Crippen for what happened next. Many do! Following a party at their flat in January, 1910, Cora vanished. Then Ethel moved into Crippen’s place and was seen around town wearing Cora’s dresses and jewelry. Crippen gave out that Cora had moved back to America. (What, without her things?) Some of Cora’s music hall friends (soon to get their own posts here, rest assured), including lady bodybuilder and strongwoman Vulcana, singer Lil Hawthorne and her husband and manager John Nash, went to Scotland Yard, expressing suspicions. Crippen told the authorities that Cora had moved back to America with a lover named Bruce Miller, and had subsequently died and been cremated. He claimed he’d not told the full story because he’d been embarrassed about being cuckolded. The police were initially satisfied, but then Crippen and La Neve took the highly suspicious step of FLEEING. At the point, the men from the Yard dug up the basement and found a fresh torso, lacking limbs and a head. The torso was chemically tested and found to contain remnants of both a sedative and a poison.

What happened next turns out to have been historic. Crew members of the S.S. Montrose, bound for Canada, WIRED the authorities back in England that they had spotted the fugitives on board their ship. The Yard then contacted police in Canada, who picked up Crippen and La Neve when they arrived. This had never happened before. In one of the first of many ominous developments for criminals in the modern age, communications technology was making flight — even to another continent — much, much harder.

And there was another first. This was also one of the first huge tabloid stories! It contained so many sensational elements: 1) a grisly murder; 2) titillating infidelity; 3) show business; 4) a shady quack; 5) the novel method of the suspects’ capture.

And lastly the difficulty of prosecution, necessitating a dramatic trial. Think about it. There is quite a convincing circumstantial case against Crippen. It’s one of those, “I mean, come on!” cases. But English jurisprudence (thank God) wants real proof. In this case, it took some arguing by the prosecution. Maybe a lodger killed her? Maybe it’s not her? And anyway, why would he do it? And so forth. (In fact, there are people to this day who have their doubts, including a bunch that exhumed the torso and tested it). But Crippen was found guilty and hanged. La Neve was exonerated and managed to slip into anonymity and live a relatively normal life. Poor Cora didn’t have the same opportunity.

There have been numerous depictions of this lurid story in books and the media. Prominent among them this 1963 film starring Donald Pleasance (well cast) in the title role: