Gale Sondergaard Was the Original Wicked Witch in The Wizard of Oz! 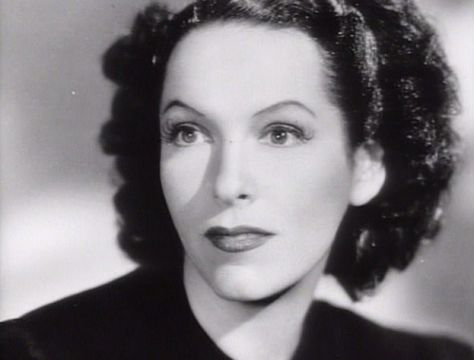 February 15 is the natal day of Gale Sondergaard (1899-1985). There are several reasons in particular we wanted to mention her today.

One is that, because she was often cast as a dark woman of mystery, she got cast in some classic comedy films, notably those starring Bob Hope: The Cat and the Canary (1939), My Favorite Blonde (1942), and The Road to Rio (1947). Other spook comedies included The Black Cat (1941), with Basil Rathbone, Hugh Herbert, Broderick Crawford, Bela Lugosi, and Alan Ladd; and A Night to Remember (1943) with Brian Aherne and Loretta Young.  She also has cameos in Crazy House (1943) with Olsen and Johnson, and Follow the Boys (1944), one of the last films featuring W.C. Fields.) 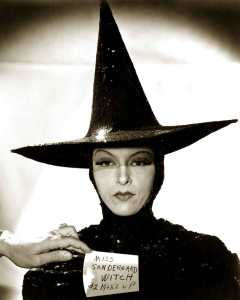 Another reason we wanted to give her a shout-out today was that she was the original actress cast as the Wicked Witch of the West in MGM’s The Wizard of Oz (1939). The original conception of the character (in the film) was a glamorous, beautiful evil queen like the Wicked Stepmother in Disney’s Snow White and the Seven Dwarfs (1938). When a decision was made to change her to a more traditional ugly witch, Sondergaard left the film, feeling such a character was less to her liking and not good for her image. She was 40 at the time — a very tricky time in a Hollywood actress’s career.

Interestingly, Sondergaard had previously played a witch in the Theater Guild’s 1928 production of Faust. While The Wizard of Oz didn’t work out, she did appear in a children’s classic the following year, when she played Tylette the Cat in The Blue Bird (1940) at 20th Century Fox with Shirley Temple (who’d also originally been considered for The Wizard of Oz, in the role of Dorothy).

Sondergaard broke into films later in life than most. She’d been a stage actress since childhood. Her father taught drama at the University of Minnesota, where she also studied. She later toured America in Shakespeare productions and became a member of the Theater Guild. Sondergaard was in eight Broadway productions through 1934. Her first Hollywood role was in Anthony Adverse (1937), a part for which she received the first ever Best Supporting Actress Oscar. Initially she was cast in many historical films of the type that were in vogue at the time: Maid of Salem (1937), The Life of Emile Zola (1937), Juarez (1939) a short called Sons of Liberty (1939), and The Mark of Zorro (1940). The Somerset Maugham melodrama The Letter (1940) cast her in a villainous light and throughout the ’40s she was often cast in World War Two spy thrillers, mysteries, and even some horror films such as The Climax (1944).

In 1946 she was nominated for her second Oscar for her role in Anna and the King of Siam (on which the musical The King and I was based). But the melodrama East Side, West Side (1949) was to be her last Hollywood film for 20 years, as her husband was director Herbert Biberman, one of the Hollywood Ten, who was blacklisted for not naming names.

She worked in theatre for two decades, and then returned to film and television in 1969. She worked constantly over the next decade. She’s in the amazing 1970 psychobiddy movie Savage Intruder a.k.a Hollywood Horror House. She was especially cleverly cast in a made for tv horror movie called The Cat Creature (1973) that made use of several stars associated with spooky roles: John Carradine, Keye Luke, and Peter Lorre, Jr. One of her biggest roles of the time was the part of the Elk Woman in The Return of a Man Called Horse (1976) — a role in which she didn’t speak any English! She was also in the all-star tv mini-series Centennial (1978), and on tv shows like Night Gallery, Police Story and Ryan’s Hope. Her last role was in the 1982 horror film Echoes with Ruth Roman and Mercedes McCambridge.