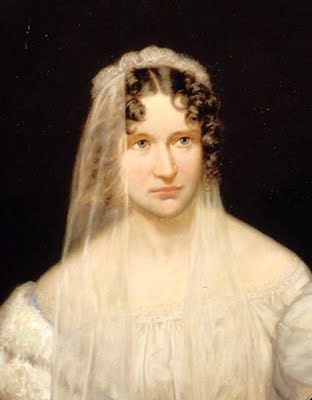 Today is the birthday of Providence poet, essayist, Transcendentalist and Spiritualist Sarah Helen Whitman (nee Power, 1803-1875). I first learned about this fascinating person from our friend the mentalist Rory Raven who took us to her house on a walking tour. She is best known today for her romantic relationship with Edgar Allan Poe, whom she came quite close to marrying towards the end of his life. A day had even been declared. But her one condition was sobriety. Poe failed at that, and was also involved with several other women. Today is also Poe’s birthday. I’ve yet to do a substantial post on him, despite his being one of my favorite writers as a youth, though there have been some small ones, including this and this.

Whitman was a fascinating person in her own right, and undoubtedly would have been a more equal match for him than his child bride Virginia Clemm, who died in early 1847. Whitman was older than Poe, a literary figure herself, the widow of writer and editor John Winslow Whitman, and an influence for Temperance in Poe’s life. Things might have gone very differently for him with her by his side. The circumstances of his death are mysterious, but whatever they were, they weren’t good. It’s idle speculation, but she might have kept him out of trouble, kept him alive a few more years. Whitman herself outlived Poe by nearly 30 years.

Whitman wrote many literary tributes to her famous lover. I like “The Raven” (1848) because it’s a true work of fan art, laced with references to his works. You see why they would have made a good couple:

Raven, from the dim dominions
On the Night’s Plutonian shore,
Oft I hear thy dusky pinions
Wave and flutter round my door—
See the shadow of thy pinions
Float along the moon-lit floor;

Often, from the oak-woods glooming
Round some dim ancestral tower,
In the lurid distance looming—
Some high solitary tower—
I can hear thy storm-cry booming
Through the lonely midnight hour.

When the moon is at the zenith,
Thou dost haunt the moated hall,
Where the marish flower greeneth
O’er the waters, like a pall—
Where the House of Usher leaneth,
Darkly nodding to its fall:

There I see thee, dimly gliding—
See thy black plumes waving slow—
In its hollow casements hiding,
When their shadow yawns below,
To the sullen tarn confiding
The dark secrets of their woe:—

See thee, when the stars are burning
In their cressets, silver clear—
When Ligeia’s spirit yearning
For the earth-life, wanders near—
When Morella’s soul returning,
Weirdly whispers “I am here.”

Once, within a realm enchanted,
On a far isle of the seas,
By unearthly visions haunted,
By unearthly melodies,
Where the evening sunlight slanted
Golden through the garden trees—

Where the dreamy moonlight dozes,
Where the early violets dwell,
Listening to the silver closes
Of a lyric loved too well,
Suddenly, among the roses,
Like a cloud, thy shadow fell.

Once, where Ulalume lies sleeping,
Hard by Auber’s haunted mere,
With the ghouls a vigil keeping,
On that night of all the year,
Came thy souding pinions, sweeping
Through the leafless woods of Weir!

Oft, with Proserpine I wander
On the Night’s Plutonian shore,
Hoping, fearing, while I ponder
On thy loved and lost Lenore—
On the demon doubts that sunder
Soul from soul forevermore;

Trusting, though with sorrow laden,
That when life’s dark dream is o’er,
By whatever name the maiden
Lives within thy mystic lore,
Eiros, in that distant Aidenn,
Shall his Charmion meet once more.