Just hitting the stands now in the Villager/ Downtown Express/ Chelsea Now, my feature on AdA: Author Directing Author, opening at La Mama later this week. Read the article here.  For this piece I interviewed the three principle artists, director/playwrights Neil LaBute, Marco Calvani and Marta Buchaca (the latter two in person, the former by phone). After you read the article at the link, please come back here and read these additional out-takes from the interview, with Marco and Marta and check out Cashel Stewart’s great photos, below. I’ve done hundreds of interviews over the last 20 years, but I believe these are the first still photos ever to catch me in the act of interviewing. But really, read the feature first, these out-takes won’t make any sense unless you do. 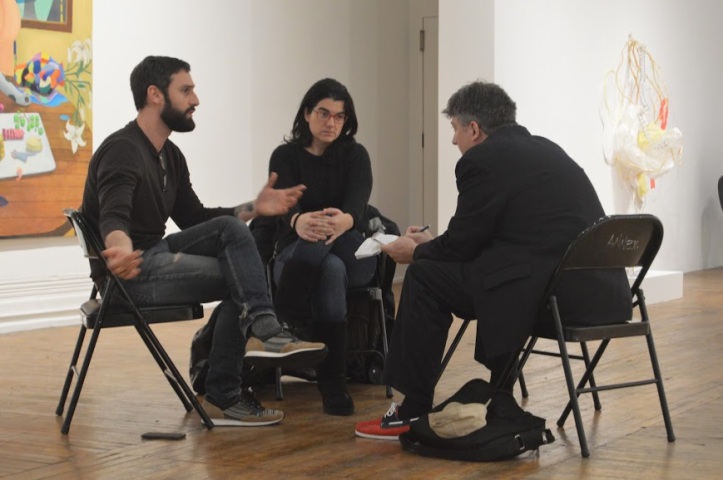 MARTA, on the transfer from Barcelona to New York:

Barcelona was a big success. Now we are here doing the same plays with different actors, in a different language and that’s good for me. I can improve my English! (laughs) There are a lot of things that changed and I think its really interesting as a playwright and director. Now I see parts of the play that I didn’t see in Barleona, more levels. You’re discovering another way because you have different actors and different approaches. I love the actors they have, they are amazing, they are really really good. In general you have amazing actors here in America. 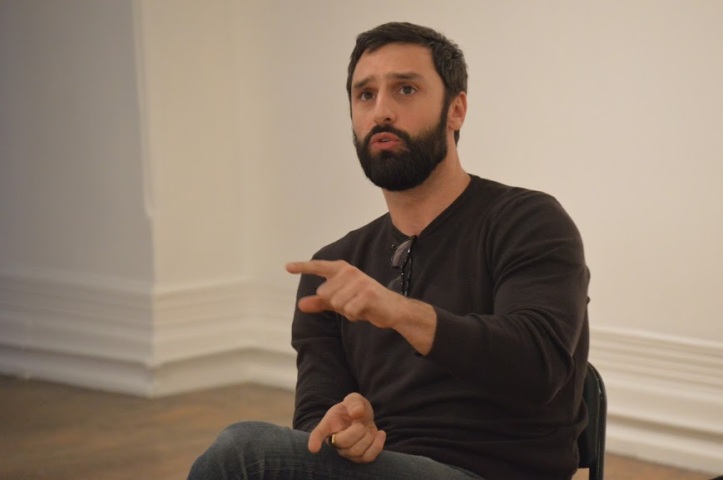 MARCO, on the methodology:

We pick a theme and then we share it and each of us wrote a piece separately. We didn’t get in touch and tell each other what we’re writing about. Of course we set up some rules. We say it needs to be two characters, that’s the main thing, it needs to relate to the designated theme, and shouldn’t require a complicated, elaborate set, not just for the financial aspect but also because the three plays have to be part of one show, so the setting needs to change easily. Or, at least, if you write a play that has specifies five floors or something be ready for the director to have to throw that out. But the biggest rules are the theme, the number of characters, and the length, which were set at 30-35 minutes.

For reasons that are spontaneous I like writing female characters in general. Especially in terms of speaking of the struggle of aging, which is more traumatic for women unfortunately. Sometimes. Not all the time. At least in my story, in my situation, it is. It’s a woman alone. She’s been left alone by her man and is at the end, probably, of her professional career. So it was dramatic as a choice for me. 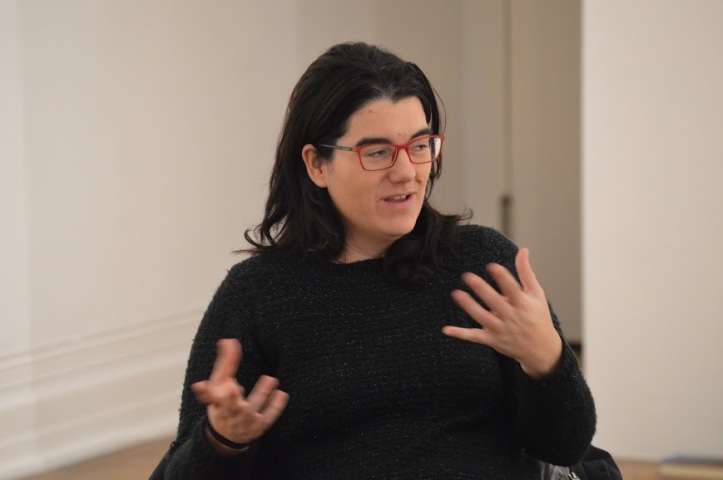 MARTA, on her play Summit, which is based on real-life Barcelona mayoress Ada Colau

“Power” [the theme of this year’s production] for me means politics. I had never written a play about politics. And this was great, because after the Barcelona production I got the opportunity to to talk with [Colau], and could add some new things. She was really interesting to write about. When she was in the campaign, all of the other candidates were men, and she was of a lower [economic] class than the other politicians in Barcelona. And she semmed really “apart” from them. They were doing a tv show and she was alone with her cell phone, because no one wanted to introduce her to that world. Now she’s in that world and doing an amazing job. But you know, like Colau, I’m a mother. When I wrote this play I had just had a baby. For me it was really important, to talk about having a professional career and having a baby. I just spent 10 days alone with without my child. For men, that’s not even a topic of conversation. If my husband had to come here to New York as I did, no one would say anything. But when I say to my family, “OK, I’m going to New York, I’m spending 10 days alone, everyone was like, ‘OK we will come and help your husband!'”. Well, yeah! But I mean, he will be fine! But you know we’re still at that point. If you are a mayor you work from 7 in the morning to 1 the next morning. All day. I talked to her about this. She was kind of unhappy about being separated from her child. She said, “It’s hard but I;m doing very important things for the city.” She made her decision. For me as a woman, that’s important. And I love these men telling her that she has to be a mother. Just a mother. We can do both. I can be a playwright and a director and a mother. 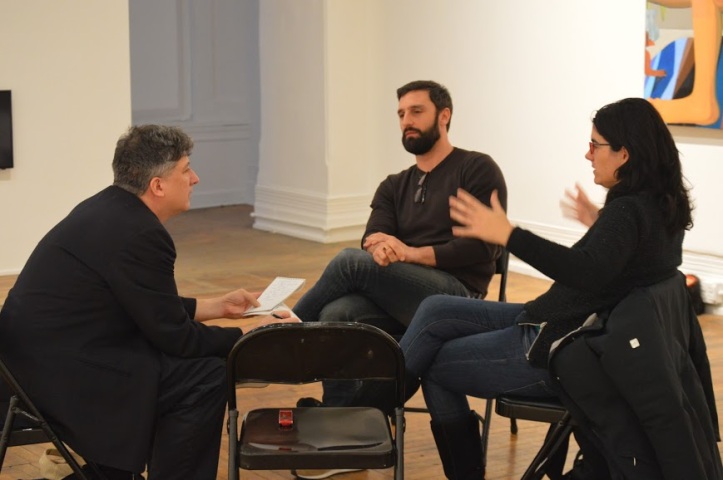 MARCO, on the process

When you write it’s a very lonely activity and when you are director you are called to also be a leader. In the way we are collaborating it feels more like a friendship than a responsibility. It’s always shared. That doesn’t mean you get to do less, but its about sharing. It’s a good fit. Wherever we are going to, we are having a very good experience….I have learned so much from AdA, by allowing somebody to work through your plays and being responsible for another play by another playwright, who is working on the other playwright’s play. I’ve learned a lot not just about theatre and writing and directing but about collaboration and trust.

MARTA, on working with actors Gabby Beans and Margaret Colin:

Maggie and Gabby are open to do anything and they want to … they are really free and they have their own proposals. And they listen to me and I listen to them and its really a collaboration. I have no friends here in New York. My cast are my friends and family. I think they know this. I think it was quite the “mom” thing in this case. Gabby is newer and brings the energy. Maggie has the experience. They are nice people. I think it is more important to me when I cast someone that they nice than they be perfect. He might be the most perfect actor in the world but if he is an asshole I don’t want to work with him! Because you work together for many days, all day, and it’s so intimate and it’s so hard, you want to be with people who have humor and are nice and have fun,

Sometimes I have to stop my actors (Richard Kind and Gia Crovatin) from having fun and say let’s be serious! We’ve done a lot in a very few days and that makes me feel very good.

Run to the box office and see it! It’s going to be amazing! 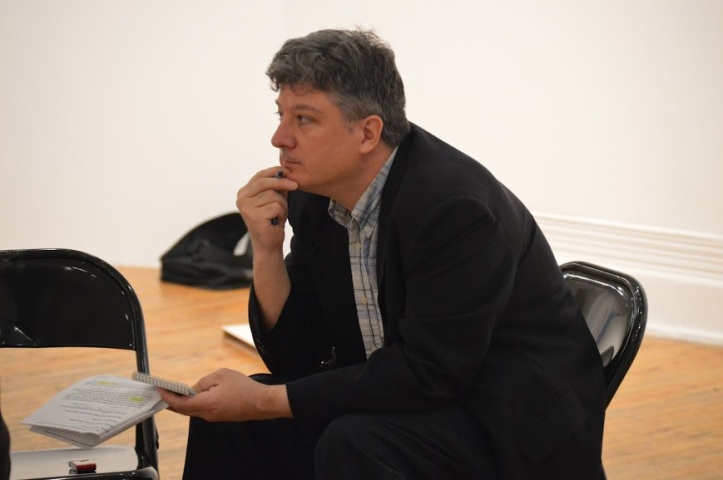