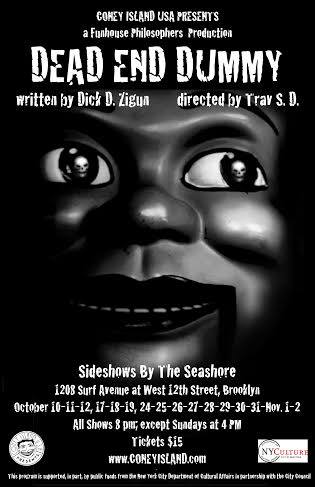 I recently realized that June of 2014 marked the 25th anniversary of my first trip out to Coney Island.

When I made that venturesome daytrip in 1989,  I’d only been living in NYC for a few months, so it ALWAYS astounds me when I meet any New Yorker, let alone any theatre person, who tells me they’ve never been out there. You mean…you’ve lived in a city for YEARS, and you’ve NEVER been to its aquarium, its closest beach, its minor league baseball stadium, its amusement park, the annual bacchanalia known as the Mermaid Parade — or for god’s sake — THE SIDE SHOW??? Do I know you? Do we have ANYTHING in common? What precisely is it you HAVE been doing?

I am particularly confused about the theatre people. I don’t really hang with people who do straight, naturalistic dramas — I can see THEM not being particularly interested, I guess. But if your bag is alternative theatre, I ASSURE you that Brecht and Meyerhold would have INSISTED that you make visiting the nearby sideshow among your first action items upon inhabiting this city. And if your bag is straight-up show biz: again, Ziegfeld and Minsky would tell you the same. Orson Welles would tell you that! The great Charles Ludlam, who PERFORMED at Coney Island USA, would tell you that. What precisely have you been doing if you have NEVER been to a SIDESHOW that is a mere subway ride away???

OK, OK, I’ve calmed down.  But since I’ve gone out there practically every season for longer than some of our soldiers have been alive, I am apt to get tunnel vision. Not upset, but bewildered. What force field prevents you from SPRINTING towards the funnest place in New York at the earliest available opportunity? Are your feet NAILED to the sidewalk? Are you a coma patient? What the hell?

Is it possible that you don’t think it is fun? Unfortunately when I ask people point blank why they haven’t been, they will repeat vague lies and rumors disseminated by certain attention-hounds and dishonest documentarians who have spread the the fallacious impression that Coney Island has deteriorated and there is nothing to see or do out there. As I mentioned, I have been going out there for 25 years, and I reiterate here what I have said on this blog again,  again and again: Coney Island RIGHT NOW is more vital, thriving, action packed, and full of incredible things to see and do than it has been in all those years. Is it as good as it was in 1912? No. But is it 100 times better than it was in the 70s, 80s, 90s, and oughts? Yes, yes, yes, yes, yes and yes. You want a comparison? The Mad Marchioness and I took a little trip down Memory Lane this week and watched the 1998 movie Went to Coney Island on a Mission from God…Be Back By Five. Don’t trust me; trust your eyes. Relative to now, Coney Island was a shithole 15 years ago. Today it rules. Go, and be amazed.

At any rate, having been going to Coney Island for 25 years, and having (off and on) produced about a dozen shows and talks at Coney Island USA for close to 15, I had the thrilling realization about the nature of my current project. I had sort of known it, but it didn’t really click until I saw the pieces coming together over the last few days: “Oh my God…I am creating a Halloween Attraction in the amusement district of Coney Island!” I sorta want to pinch myself.  I consider this as much an important resume credit as any other on my profile. It’s not well known but haunted house attractions are among the broad family of popular amusements I have produced over the years. I was one of the co-producers of Nightmare NYC during its first two years of operation (2004-2005).  Producing a haunted house in my family barn at age 12 was my very first theatrical producing credit.  Many of the theatrical effects we achieve in Dead End Dummy make it the natural successor to those earlier projects.

Many people don’t know that Coney Island USA founder/ director Dick D. Zigun is a playwright with a degree from Yale. Coney Island USA grew out of his work in theatre and performance art. For many years, he ran the annual Creepshow at the Freakshow every October, a sort of hybrid haunted house and theatre event. he has now begun replacing the Creepshow with stage plays. Dead End Dummy has proven a perfect choice. Ostensibly an experimental play (and it is, formally as you will see), it has proven in practice something like a Coney Island thrill ride, full of bells and whistles. It’s a story about a vaudeville ventriloquist whose life is disrupted by the advent of Thomas Edison and the entertainment machines that kill live theatre. His story takes him on a sort of roller coaster ride through 20th century entertainment (vaudeville, silent movies, radio, television), with ups, downs, madness and destruction.

But here are the many elements I hope will add up to an amazing night in the theatre;

* The spooky backdrop painted by Marie Roberts and Africasso

* A 5D Sensurround Soundscape by the wizards who brought you Youthquake!

* A live music score courtesy Becca Bernard, ranging from brooding, expressionistic cello to honky tonk piano to the brightness of two ukuleles. She also takes a pie in the face and tap dances.

* Coney Island sideshow talker Scott Baker as an insane ventriloquist, with his pals Moe, Plugger and Handy, brings not only his vent skills to the table but chops wrought by long years on the boards, and even a couple of magic tricks.

* None other than Poor Baby Bree, who performs in the Delsarte style of the old melodramas, and favors us with old-timey song in her patented style

* Douglas Mackrell of the Royal Order of the Holy Mackerel, who plays Thomas Edison with suitable doses of disrespect and dazzles with his cartoon voice-overs

* Yours truly, Trav S.D. typecast as the smarmy host of a vaudeville nostalgia radio show — and I get to play my uke!

* Rhiannon Schaefer and Arianna Geneson as the slinky, slippery shadows, ice cold creatures from another dimension who steal your souls if you let them get too close

*And Dick’s play which is full of tradition and heart, expert stagecraft and playful experimentation.

*And don’t forget the Freak Bar with its brand new (old) juke box, before and after the show!

We open this Friday. More information and tickets are right here: