The Surprising Origins of United Artists 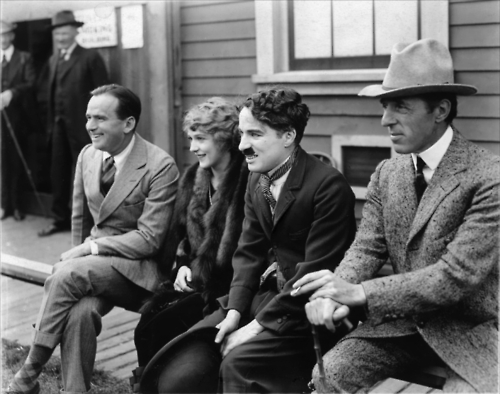 On this day in 1919 was launched the film distribution entity known as United Artists.

This won’t be the least bit surprising to film buffs, who know the story well, but it will be more than interesting I’ll wager to those who don’t already know it. Most people I imagine think of United Artists as just the same as the major 20th century studios: Paramount, MGM, Fox, Warner Brothers, Columbia etc, and indeed over time it came to resemble them. But at the outset it was quite different. Those studios were founded for the most part by businessmen, entrepreneurs, investors. These are people who love movies, but look at them, shall we say, from a certain perspective.

From the beginning, United Artists was different, for it was created by the biggest names in the CREATIVE end of the business. The idea was hatched during a World War One bond rally by Douglas Fairbanks, Mary Pickford, Charlie Chaplin, D.W. Griffith, and William S. Hart (Hart later dropped out). In 1919 they hung out a shingle for their own studio, which was ostensibly to prevent the producers at the existing studios from taking too much of the profits from their films.

The idea was a bit Utopian. Griffith dropped out within five years; in the talking era Fairbanks and Pickford’s careers petered out and Chaplin made films with increasing rarity. In 1924 Joe Schenck was brought in to turn the place into a real movie studio. He left in 1933, and others were brought in. By mid century, it was very much like the other major studios, with with very little public awareness of its original founding.

For more on show business history, consult No Applause, Just Throw Money: The Book That Made Vaudeville Famous, available at Amazon, Barnes and Noble, and wherever nutty books are sold.