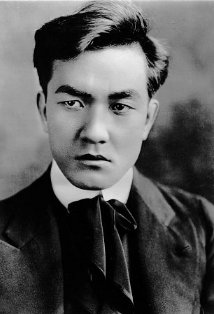 Tribute today to the remarkable trailblazer Sessue Hayakawa (1889-1973). A member of the Japanese nobility, he was thwarted in his ambition to serve in the military due to an ear injury in his youth. He studied for a couple of years at the University of Chicago, then began acting in Japanese-American theatres in Los Angeles where he was discovered by Thomas Ince in 1914. For the next decade, Hayawaka was a major Hollywood star and sex symbol, starring in such films as Cecil B. DeMille’s The Cheat (1915) He was America’s first Asian American movie star. From 1918 on, he was his own producer as well, releasing his films through his own company Haworth Pictures.

By the mid 20s things turned sour for Hayakawa financially, so he tried new directions. In 1925, he wrote the novel The Bandit Prince, then adapted it into a one act play, then toured the big time Keith and Orpheum circuits with it through 1927. In 1928, he toured again in the Edgar A. Woolf playet “The Man Who Laughed”, co-starring Lucille Lortel. In 1931, he appeared in Daughter of the Dragon with Anna Mae Wong, then spent a few years in japan, then in France, making films in both countries.

To learn more about  the history of vaudeville, consult No Applause, Just Throw Money: The Book That Made Vaudeville Famous, available at Amazon, Barnes and Noble, and wherever fine books are sold.