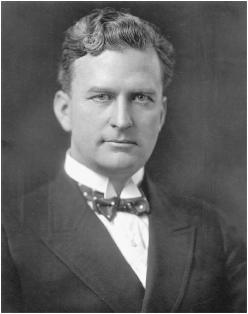 I was delighted to learn this morning that Ince was born in Newport, Rhode Island (which is where all the best people come from — or near there, at any rate). And also that he began his professional career as a child, acting with stock companies and in vaudeville. (His parents were also actors). His stage career was not at all successful, however and so he drifted into films, briefly as an actor, then as a director, then as a director/ producer, then as a supervising producer, and then as a studio chief. He went from Biograph to the Independent Motion Pictures Company (IMP) in 1910, to the New York Motion Picture Company in 1911, to co-founding Triangle Studios with D.W. Griffith and Mack Sennett in 1915, to Thomas H. Ince Studios in 1918.

His specialty was producing westerns (he discovered William S. Hart, among other things) but he also made prestige dramas. Above all he is credited with inventing many or most of the innovations that we associate with Hollywood’s “factory” or “assembly line” method of film production. He was simply a very organized individual and brought that propensity to bear when he was charged with the task of directing and producing films. Early on films had been semi-improvised (only planned out in the sketchiest of ways), and the same person often acted as writer/director/producer/editor. It was Ince who insisted on planning out films first on paper in elaborate detail, devising what came to be known as the shooting script, and calculating how to shoot films out of order for maximum efficiency. He came up with division of labor, assigning different tasks to different members of the production staff. He built the first studio with standing, semi-permanent multi-use sets (e.g., a Western town, a Swiss village, etc) that could be used for an infinite number of films. It was called Inceville, and much copied thereafter. And he made many notable and groundbreaking films using his methods, including The Italian (1915), and Civilization (1916) and an adaptation of Eugene O’Neill’s Anna Christie (1923) starring Blanche Sweet.

In 1924, he died while vacationing on William Randolph Hearst’s yacht with Hearst, Marion Davies, Charlie Chaplin, Louella Parsons, et al. There are many confusing and divergent stories about what may or may not have happened to him. Read all about it here: http://hollywoodlandforever.blogspot.com/2013/04/the-shroud-of-mystery-behind-thomas.html

Now, since it is is Native American Heritage Month, we share the 1914 Ince film The Last of the Line, starring Sessue Hayakawa:

To learn about vaudeville consult No Applause, Just Throw Money: The Book That Made Vaudeville Famous, available at Amazon, Barnes and Noble, and wherever nutty books are sold.