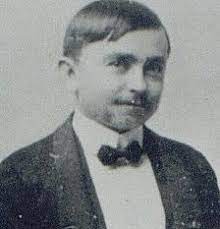 Some brief notes on professional little person Caspar Weis (1872-1965). A native of Luxembourg, Weis was the son of a gamekeeper, one of eight children, only one of whom, a younger sister, was also a little person. Weis attained a maximum height of 42 inches (3’6″) in his young adulthood, although he eventually grew to just under four feet. He was trained as a watchmaker, and was plying that trade when an opportunity arose to join a musical comedy company that was passing through town. His musical skills (he played violin) were an asset to him in this new endeavor. He toured most of the major nations of Europe, meeting crowned heads along the way.

Weis’s travels brought him to America in the 1890s. Early in the new century he found employment at Coney Island’s Midget City, where he met and married French little person Jeanne Douvain, who went by the handle Queen Mab (the same stage name used by Nellie Keeler), The pair toured vaudeville and the Ringling Brothers Barnum and Bailey Circus, and participated in acts with names like “The Original Lilliputian Co.”  “Hans Fritz & Co.”; “Katzenjammer Kids Co.”, “Kaptain& Kids Co.,” “Mutt and Jeff Co.,” “Soldier Girl Co.,” “Mr. Barnum Co.,” “Midget Follies Co,” You’ll note that many of these acts were patterned after popular comic strips of the day. Weis was known for being a joiner: he joined the Masons, the Shriners, the Odd Fellows, and the Order of Moose, gaining a lot of attention by being the smallest member of each fraternal organization.

In 1913, the Weises purchased the Canton, Pennsylvania mansion of Fanny Vining Davenport (mother of Fanny Davenport and Harry Davenport), to which they retired. The house burned down in 1951; they lived in an apartment thereafter. This local history website has a slew of additional info on the Weises.

For related reading, please check out Rose’s Royal Midgets and Other Little People in Vaudeville.