David Copperfield And His Ever-Expanding Empire of Everything 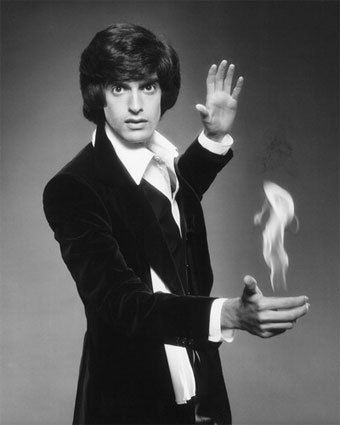 Rarely do I find contemporary show biz stories as compelling or as inspiring as I do that of magician David Copperfield. In fact, I find his biography far more interesting than his act.  Born David Kotkin in Metutchen, New Jersey in 1956 to a haberdasher and insurance adjuster, Copperfield has for some time been the highest grossing solo entertainer in history, as well as the wealthiest magician who ever lived. If you’re not the type to follow such things, Copperfield is in fact richer than most movie stars, through his television specials, live performances in Las Vegas, and investments in projects such as his resort in the Bahamas, called “The Islands of Copperfield Bay”. He also operates the world’s largest magic archive and museum, the International Museum and Library of the Conjuring Arts, in Las Vegas.

Copperfield fit the ordinary profile of those who go into professional magic — a shy kid who began practicing and performing at local parties when he was only ten years old. At 12 he became the youngest person ever admitted to the Society of American Magicians. As a youth he performed annually at summer camp, and was as interested in theatre as he was in his narrow specialty, the conjuring arts. A devotee of Broadway, he was to bring glamorous production values to his own shows as soon as he had the means. This, coupled with his extraordinary good looks, fed his stardom. At 18 he was booked for a live show called The Magic Man in Chicago, in which he sang, danced and performed his original illusions. This is when he took his stage name, copped from the Dickens novel. It is a measure of his success that when you Google the name now, you get the magician, and have to scroll a while before you get the book. The Magic Man was the longest running musical in Chicago’s history.

Scouted by a producer Copperfield was booked to host a TV special called The Magic of ABC in 1977 — and this is where he came from. Do the math, Copperfield was only 21 at the time. I was a kid then and it was all very perplexing. Who was this guy? Where did he come from? I watched a LOT of variety television when I was a kid. Ordinarily acts came up gradually. You became aware of performers BEFORE they got their own TV specials, from seeing them in short spots on variety and talk shows for a period of months or years. Copperfield went DIRECTLY to his own specials, 20 of them between 1978 and 2001. Already famous, THEN he would deign to appear on Merv Griffin, Mike Douglas, Dinah!, The John Davidson Show, The Late Show with David Letterman, The Arsenio Hall Show, etc. 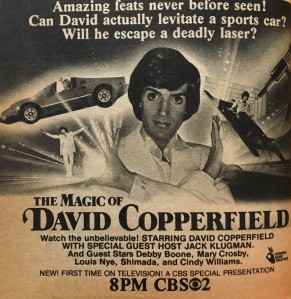 Speaking personally, I was usually pretty bored by the specials themselves, but Copperfield got me to tune in out of curiosity, and in television that is the whole game. Many of his illusions were about SCALE. His most storied stunt was making the Statue of Liberty disappear in 1983, which must have been very impressive to those in attendance, but, like all traditional theatrical magic was pretty lame on the small screen. From an audience perspective, Samantha Stevens did what magicians do every week on Bewitched reruns and with less apparent effort. But Copperfield had a knack for showmanship and for keeping his name out there. Think of the competition. Other famous magicians looked like Doug Henning and Kreskin. David Copperfield looked like a rock star, or at the very least, like Shaun Cassidy.

And so he kept expanding beyond the specials. In 1980 he was in the horror film Terror Train with Jamie Lee Curtis and Ben Johnson. He acquired the collections that became the International Museum and Library of the Conjuring Arts in 1991. It is reportedly accessible only via a secret door in the back of a Las Vegas sex shop, but contains the world’s largest collection of Houdini materials, as well as illusions of Robert-Houdin, Orson Welles, and hundreds of other illusionists. He began dating German supermodel Claudia Schiffer in 1993; they were a couple through 1999. Copperfield played himself in cameos in films like Robert Altman’s Prêt-à-Porter (1994) and Don Scardino’s The Incredible Burt Wonderstone (2013) with Steve Carell, Jim Carrey, James Gandolfini and Olivia Wilde. In 1996, he starred on Broadway in David Copperfield: Dreams and Nightmares, which broke the Guinness record for highest Broadway attendance in a week. He gathered and edited two fiction collections David Copperfield’s Tales of the Impossible (1996) and David Copperfield’s Beyond Imagination (1997), with contributions by writers like Joyce Carol Oates, Dean Koontz and Ray Bradbury. In 2006 he purchased the 11 Bahamian islands that became “The Islands of Copperfield Bay” — which are rumored to contain the Fountain of Youth! In 2016 he purchased a Las Vegas mansion for the sum of $17.55 million. Over the years he has collaborated on projects with the likes of Michael Jackson, Francis Ford Coppola, and Oprah Winfrey.

To learn more about variety history, including television variety, please see No Applause, Just Throw Money: The Book That Made Vaudeville Famous,