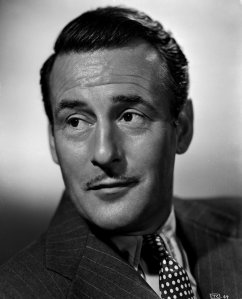 I first learned about Tom Conway (1904-1967) the old-fashioned way: I saw him in movies, assumed he was George Sanders and then realized that he wasn’t.

Conway was actually Sander’s older brother, who’d acted with the Manchester Repertory Company and BBC radio before belatedly following his brother out to Hollywood. Though the older of the two, one thinks of Conway as getting Sanders’ leavings, as when he took over the Falcon series of B movies from Sanders in the ’40s (Sanders appeared in three of the mysteries, Conway in ten). Conway also played The Saint on radio a decade after Sanders had played the character in B pictures.

Though they both acted in B movies in addition to major features, one associates Conway more with the Bs. After the Falcon pictures, Conway played Bulldog Drummond in a couple of movies. And he’s also in a couple of Tarzan pictures (naturally not as the title character but as one of the guys in the pith helmets). In addition to The Falcon, The Saint and Bulldog Drummond, Conway played one other famous detective character — he replaced Basil Rathbone as Sherlock Holmes on radio, 1946-47/

Comedies included Mr. and Mrs. North (1942) with Gracie Allen and Rio Rita (1942) with Abbott and Costello.

Though Sanders beat Conway yet again by being so memorable as Shere Kahn in The Jungle Book (1967), Conway had actually been the first to do voice-over work for Disney, in Peter Pan (1953) and One Hundred and One Dalmatians (1961).

On television, he starred as the title character on ABC’s Mark Saber, Homicide Detective (1951-54) and was a regular on The Betty Hutton Show (1959-60) in addition to guest shots on shows like Alfred Hitchcock Presents and Perry Mason. His last role was in the-all star black comedy What a Way to Go! (1964) with Shirley MacLaine. By the following year he was discovered living in a flophouse and soon thereafter was hospitalized for long stretches, with old friends like Lew Ayres (with whom he’s appeared in 1941’s The People vs. Dr. Kildare) and sister-in-law Zsa Zsa Gabor giving him financial support. Cirrhosis of the liver took him in 1967, just around the time Sanders was playing Shere Kahn. Sanders followed his older brother out the exits six years later.