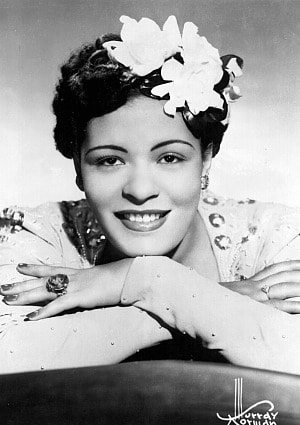 Some brief words of tribute to the influential singer Billie Holiday (Eleanora Fagan, 1915-59). “Influential” is kind of an understatement — I can’t even count the number of female singers (including dozens of friends and colleagues) I’ve heard in my life, where I’ve listened to them and said to myself, “They’re doing Billy Holiday”, signifying a combination of studied vocal fry and a bending, lilting approach to melody, often seeming to go a little flat for effect. This is not remotely to minimize her genius. It’s more like I’ve spent a lot of listening to it, mostly in my early 20s.

Holiday was from Baltimore, the daughter of jazz musician Clarence Holiday, who played guitar and banjo with Eubie Blake, and later with the big bands of Fletcher Henderson, Benny Carter, and others. He was only 17 when Billie was born. Shortly thereafter he served in World War One, where he was injured by mustard gas. After the war, he didn’t return to the family. He died in 1937 of pneumonia after he was refused service at an all-white Texas hospital. Billie was raised in latchkey fashion by her single teenage mother Sadie and other relatives. 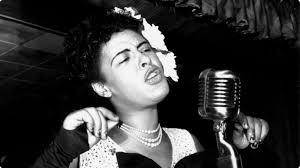 In 1929 Sadie and her daughter moved to Harlem. Both were forced to turn tricks for a time (and arrested for it) but by the early ’30s, BIllie was already singing in Harlem nightclubs and developing her distinctive style. She was only 14! Her stage name was borrowed from silent screen actress Billie Dove. Friend, collaborator, and influence Lester Young gave her the nickname “Lady Day”. By 1933 she had already recorded with Benny Goodman. In 1935 she appeared in the Duke Ellington musical short Symphony in Black: A Rhapsody of Negro Life. She recorded singles with pianist Teddy Wilson in 1935, “What a Little Moonlight Can Do” and “Miss Brown to You” She sang with Count Basie’s band in 1937; Artie Shaw’s in 1938. In 1939 she first performed the song “Strange Fruit”, a tune about lynching, which she performed until the end of her life, and became a kind of Civil Rights anthem. Her most popular song “God Bless the Child” was recorded in 1941. The following year she recorded with Paul Whiteman. In 1946 she was in the film New Orleans with one of her musical heroes and models, Louis Armstrong.

Unfortunately this was also the period in which Holiday began to get involved in heroin. In 1947 she was busted for possession. In 1948 she sang at Carnegie Hall, a sold out concert that presumably took some of the sting out of the embarrassment. Unfortunately she was again arrested in San Francisco the following year, and then had her cabaret card revoked, meaning that she could no longer perform in establishments that sold alcohol, which is of course was her natural performing environment.

In 1950, Holiday appeared in the musical film short Sugar Chile Robinson, Billie Holiday, Count Basie and His Sextet. During the decade she recorded a dozen popular record albums and toured Europe. In 1956 she played Carnegie Hall again and released her autobiography Lady Sings the Blues. Unfortunately, her heroin addiction, as well as alcoholism, took a toll on her health. She died of heart failure, springing from cirrhosis of the liver, in 1959 at the age of 44. She was arrested by federal authorities on her deathbed, on drug related charges. 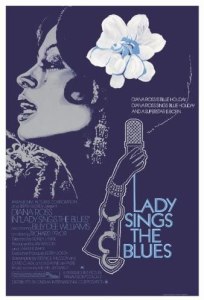 There is a dramatic shape to all this, mixing elements of Camille with the lives and deaths of American artists as diverse as Bessie Smith and Lenny Bruce. For people of my age, too young to have been fans while she was alive, the pathway to an appreciation for Holiday tends to be the terrific 1973 bio-pic Lady Sings the Blues starring Diana Ross. For younger folks, it may well be 2020’s The United States vs. Billie Holiday, which we wrote about here.

For more on show biz history, please see No Applause, Just Throw Money: The Book That Made Vaudeville Famous,