Paul Whiteman: The King of Jazz 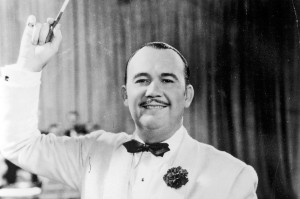 PAUL WHITEMAN, “The King of Jazz”

There were so many people claiming to be Kings and Queens of Jazz in these years its surprising there weren’t some outright wars of succession. Though this portly gentleman used the title too, his last name was a much more accurate description of his style of music. To a purist, Whiteman’s vaudeville era music was only jazz if you think the soundtrack music to the Little Rascals is jazz. Sure, it’s a Big Band. Sure they’ve got a horn section. But it ain’t got a thing if it ain’t got that swing. Jazz-influenced pop music is what Whiteman and his various orchestras made, and for awhile he had the most popular band in the country. He also nurtured some of the greatest musicians and singers America produced in the teens and twenties, earning himself the affection nickname: “Pops.”

Born in Denver in 1890, Whiteman learned to play the violin as a child. His early professional experience did not hint at the direction his career was to take: positions with the Denver Symphony and San Francisco People’s Symphony; Navy bandmaster in World War I. In 1919 he formed his own orchestra specializing in a style he called “symphonic jazz” – that is, large scale orchestrated arrangements of jazz-like pop, but without the noisy and chaotic (and most would say thrilling) improvisation that had been the hallmark of Dixieland. His outfit was the perfect vessel to introduce George Gershwin’s experiments, such as “I’ll Build a Stairway to Paradise” (George White’s Scandals, 1922) and “Rhapsody in Blue” (Aeolian Hall, 1924). Vaudeville provided steady work, and his bands were to play the Palace numerous times in the 20s. In 1925 they played the Hippodrome – one of the few acts to make sense in that cavernous venue. (The band returned in 1936 to supply the music for Billy Rose’s Jumbo).

His late twenties line-up included some legendary personnel. From 1927-29 the band included the great Bix Beiderbecke on cornet and the Dorsey Brothers (Tommy on trombone, Jimmy on clarinet and altso sax), soon to form their own organization.

Those years saw also the employment by Whiteman of the Rhythm Boys, a male singing trio consisting of Harry Barris, Al Rinker and Bing Crosby. The boys had been working the Fanchon and Marco circuit out of Los Angeles when Whiteman discovered them. The boys toured the country with the Whiteman orchestra, playing the Palace in 1928, and appearing in the 1930 film The King of Jazz. Then Whiteman sent the Rhythm Boys around the Keith Circuit with their own unit, along with a cardboard cut-out of Whiteman and a recording of him saying “Ladies and Gentleman, I take great pleasure in presenting to you the Rhythm Boys!” There was as much of “boys” as of “rhythm” to the singing group in these years (Bing was in his mid-twenties), and their constant fooling around on the job got them fired. This was of course one of those happy sackings, for Bing soon had his own CBS radio show, a lucrative recording career, and a movie contract with Paramount studios that led to countless classic pictures, an Oscar for best actor, and American immortality. Whiteman is now a footnote in Crosby’s career and not the other way around. Who knew?

There was still a lot of life left in Pops, too, including numerous radio programs, such as Kraft Music Hall and Paul Whiteman Presents; films, like Thanks a Million (1935), Strike Up the Band (1940), and Atlantic City (1944), and even television programs in the 1950s.

To find out more about Paul Whiteman and the history of vaudeville, consult No Applause, Just Throw Money: The Book That Made Vaudeville Famous, available at Amazon, Barnes and Noble, and wherever nutty books are sold.