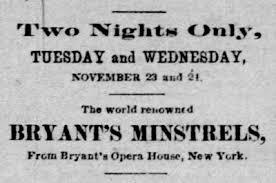 February 23, 1857 was the date of the debut of Bryant’s Minstrels, the second longest-lasting blackface minstrel** troupe formed prior to the Civil War (after E.P. Christy’s).

The Bryant Brothers, Dan, Jerry, and Cornelius “Neil”, were actually O’Neills, who hailed from upstate New York. “Bryant” seems an odd stage name to have chosen; I’m guessing it may have been inspired by literary lion William Cullen Bryant: poet, journalist, editor of the New York Post, and the man for whom New York’s Bryant Park is named. At any rate, in addition to the original three Bryant minstrels, others took the name. In the mid ’60s there was a William T. Bryant with the troupe who may or may not have been a blood relative (it was common to take on the name of a theatrical troupe as your own in those days). Confusingly, a William H. Bryant, nephew of the brothers, was a member of Neil Bryant’s troupe in 1878. Even more confusingly, there was also a well known Billy Bryant, of the teams of Bryant and Richmond and Bryant and Williams, whose real name was William Thomas Hanson, and no relation. Also no relation was Fred Bryant, whose real name was Snyder, and who had teamed with Charley West (no relation to Billy West) as well as Evans and Hoey. Got all that? Neither do I.

But to return to the troupe in question. As in most companies of the type, the members were all multi-instrumentalists, singers, dancers, and comedians, each specializing in a different instrument: Jerry played tambourine and bones, Dan played banjo, Neil played accordion and flutina. A fourth man Phil Isaacs, played fiddle, completing the quartet. At the time of the group’s formation, Dan and Jerry were veterans of several major minstrel companies. The multi-talented Dan Emmett, traditional composer of “Dixie” joined the troupe in 1858. Jerry died in 1861, leaving two Bryant brothers for most of the troupe’s lifespan.

For the first decade or so they played an open ended run at Mechanics’ Hall on Broadway, a clear indication of the working class appeal of this kind of entertainment. The troupe also toured nationally, and in 1868 moved into the theatre at Tammany Hall (later the home of Tony Pastor’s) and for a time, they had their own opera house. It was during this phase that they added African American little person Thomas Dilward or “Japanese Tommy” to their roster, but it did little to bolster their declining popularity. Dan died in 1875. Neil kept the troupe going until 1882, the virtual dawn of vaudeville, a distinctly different form of popular entertainment.

To learn more about vaudeville and related variety arts, please see No Applause, Just Throw Money: The Book That Made Vaudeville Famous