Today we give the lie to our own self-delusion that we dislike both superhero franchises and musical theatre in one swell foop. As to the former…this makes our umpteenth Superman related post, and I’m sure the topic isn’t exhausted. We’ve written about the comic book origins; the old Superman movie serials, the Superman radio show, the Adventures of Superman TV show from the ’50s, the Superfriends Saturday morning cartoon show, and the Christopher Reeve films of the ’70s and ’80s. Now we continue that exploration by treating of a missing link that belongs roughly in the middle of all that, betwixt the George Reeves and cartoon incarnations.

45 years ago today there occurred a bizarre, now-notorious musical theatre television experiment on ABC. Clips from it made the rounds in the early days of social media — what else is social media good for? — and since then both the tv version (which is different) and recordings of the legendary stage original have combined to make it one of my favorite musicals.

The origins of the show date almost a decade prior to the TV version. It’s a Bird…It’s a Plane…It’s Superman opened at the Alvin Theatre in late March, 1966 — just two months after the Batman TV series launched. So there was something in the zeitgeist. The Superman stage show was “fun” as opposed to straight-up camp like Batman, however, despite the inclusion of a song called “Pow! Bam! Zonk!” One of the most delightful things to know about it is that it was co-written by the team of David Newman and Robert Benton, the same guys who later co-wrote the screenplays for the Christopher Reeve Superman films, so this show can be considered the germ of that phase of Supermania. (This talented team later also co-wrote such Hollywood hits as Bonnie and Clyde, There Was a Crooked Man, and What’s Up Doc?, among others). The tunes for the show were written by Charles Strouse, who ’til then had composed the songs for Bye Bye Birdie (1960) and Golden Boy (1964) and would later do Applause (1970), Annie (1977), Nick and Nora (1991) and many others. The plot concerns a rival for the hand of Lois Lane and a supervillain scientist who team up to kill Clark Kent/Superman. Bob Holiday, who’d been in Fiorello! with Tom Bosley, played the title character, with Jack Cassidy, Linda Lavin, Patricia Marand, Michael O’Sullivan, and Jerry Fujikawa also in the cast. (The latter connection is another way I’ve learned about this show — his daughter Cyndy has guest posted for this very blog!)

Despite good notices and three Tony nominations (for Cassidy, O’Sullivan, and Marand) and the popularity of one its songs (“You’ve Got Possibilities”), which has since become a standard, It’s a Bird…It’s a Plane…It’s Superman closed after three and a half months. It has since been revived regionally many times at places like the Goodspeed Opera House, the St. Louis Municipal Opera, and the Dallas Theatre Center. It has such a great built-in gimmick — Holiday hung around and signed autographs for kids after the show, just like his predecessors as the Man of Steel had done in earlier decades. But Broadway at the time, I guess, wasn’t really for little boys so much in those gender normative times. (And it’s kind of a lousy title, which can’t have helped word of mouth. Do you really want to SAY all that?) But apart from its musical charms, this show set a clear precedent for such later spectacles as Spiderman: Turn off the Dark (2011) and King Kong (2013 Melbourne, 2018 Broadway). So its place in musical theatre history is earned many times over. 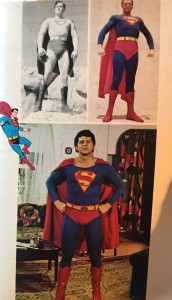 In 1975, as we said, a truncated version of the show was revived for ABC television, and this one I do love for camp value. The songs have all been discoed up, and it makes use of delirious green screen effects and cartoony sets and costumes, and it’s just all around weird in a David Lynch kind of way. The title character, pictured above in a TV Guide spread, was played by David Wilson, but the cast that surrounds him is what fills us with delight: Kenneth Mars, Al Molinaro, Loretta Switt from M*A*S*H, Allen Ludden from Password, Leslie Ann Warren and David Wayne! Of course, musicals on TV weren’t a new thing even back then. Recall that Rodgers and Hammerstein’s Cinderella had been CREATED for television, and there were those legendary productions of Once Upon a Mattress with Carol Burnett, and dozens of others. But they were kind of rare in the ’70s. This, I think, is one that would be fun for NBC to revive (in its entirety with original score) in its current spate of live musical productions. Or, if film of the original production survives, it would be nice to see on BroadwayHD! But ’til then you can see the kooky ’70s one on Youtube, where it has provided me with much mirth.