One of the most rewarding aspects of having written No Applause and this blog has been hearing from the descendants of the performers I write about, sometimes expressing appreciation, sometimes answering questions that I’ve asked or providing tidbits of their own. On occasion, I’ve been gratified to learn about contemporary descendants of vaudevillians who have carried on the family tradition by being in theatre or show business themselves. This has happened a few times now, enough so that we can begin to consider it a mini-content stream. We’ve done it with the families of Eddie Foy and Ming and Toy, and I am about to begin a piece or series on Joe Cook and his great-grandson, who is an actor.

The series we launch today chronicles several generations of ancestors of playwright/ performance artist Cyndy Fujikawa. Some of our readers may already know her or know her work — but in any case, I am going to save details about that for her own post, which will be the culmination of this series. Cyndy has been doing lots of research for a new play about her illustrious show biz family, gathering oral history from older relatives, and material from family archives, libraries and via the internet. For all but the last post in the series, Cyndy is our guest blogger; it’s all in her own words:

My great, great grandfather, John M. Burke, started a multi-generational family of vaudevillians that spanned the life and times of vaudeville itself.  His career began with The Black Crook – though which production is unclear to me.  Soon after, he started his own Boston based troupe and toured in the very early days of vaudeville (1870s) until his onstage death during a rehearsal, probably in the 1880s.

Burke was known as “the family genius,” which I assume meant he was a terrific talent.  Burke was the great grandson of Arthur Guinness, and his father, John Burke Sr. had made a fortune bottling Guinness Stout and distributing it around the world, including the USA.  John M’s wealthy Irish family had educated him at Oxford University, but apparently he left school, came to the US and became an actor.  WTF?  So the “family genius” – the only Irishman I have ever heard of who ran away from money to come to America, began 3 more generations of full time song & dance and comedic performers.  The descendants of John M. Burke and his wife & partner, Annie Irish, were doomed to tour incessantly and sacrifice “normal lives” for circus ones.  The family served their sentences at Keith’s in Boston, the Palace Theatre in New York, and on the road with the Four Cohans, Eddie Dowling, Victor Moore, Fred Allen, Mae West, George Burns & Gracie Allen, and other fellow travelers.  When the depression came, Burke’s daughter and grand daughters –all seasoned performers who knew nothing but life on the vaudeville stage – were without jobs or traditional job skills.  Their wallets empty, they remained ignorant of the fact that their ancestor had abandoned substantial family money in order to pursue a dream of fools.

I wish I knew more about the act of John M. Burke.  I know his stage personae was “Dublin Dan.”  Though John M. Burke had an English accent, his alter ego undoubtedly spoke with an Irish brogue.  John M. must have at least been a producer, a comedian, and writer and a director.  This poster, which I found in Lincoln Center Library, tells us all we know about Dublin Dan and his troupe:

Evidently, wife Annie Irish was a soprano and the daughter of an actress, Mary Irish.  Mary ran a boarding house in Boston, which catered to vaudeville performers, which tells me she loved actors and outcasts.  Mary Irish must have approved of her daughter’s marriage to a tenacious Irish actor with his own company of entertainers. 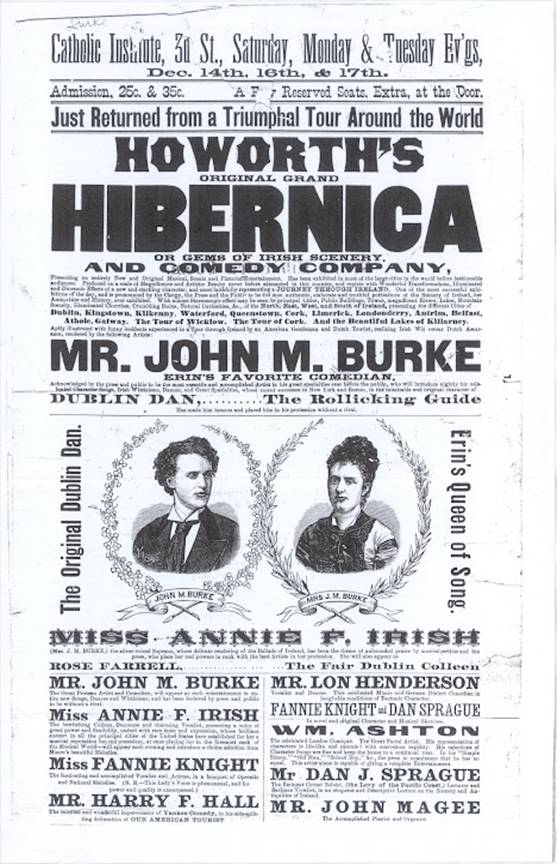 Dublin Dan must have also been a songster.  I just discovered this book of songs at Brown University.  If anyone reading this would like to assist me in getting access to the “Prime and Jelly Songs” at Brown University by John M. Burke, I am grateful!

Here is the only photograph of “Dublin Dan” that my family still has.  How poetic that the face is gone.  The family genius is still a mystery to me.

And to find out more about the variety arts past and present, consult No Applause, Just Throw Money: The Book That Made Vaudeville Famous, available at Amazon, Barnes and Noble, and wherever nutty books are sold. And don’t miss Chain of Fools: Silent Comedy and Its Legacies from Nickelodeons to Youtube, to be released by Bear Manor Media in 2013.