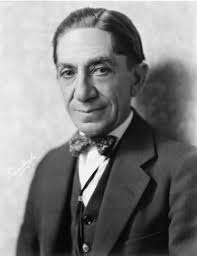 Silent comedy fans will recognize the visage of Snitz Edwards (Edward Neumann, 1868-1937) from the Buster Keaton films Seven Chances (1925), Battling Butler (1926) and College (1927). Less well known is that he began his film career with three George Bickel–Harry Watson comedies in 1915: The Fixer, The Politicians, and Keep Moving. His work in Fatty Arbuckle’s Good Night, Nurse (1918) is what brought him to the attention of Keaton.

Those who have seen his few talkies, such as The Public Enemy (1931) know that Edwards spoke with an accent. This is because he came from Budapest, immigrating to the U.S. in his youth. Edwards toured the nation with stock companies for many years, breaking onto Broadway with Little Red Riding Hood in 1900. His last show before going into films was High Junks (1913-14), produced by Arthur Hammerstein, starring his daughter Elaine.

Edwards’ three daughters, Evelyn, Cricket, and Marian all became actresses in their childhood, and later remained in the movie business in adulthood.  Evelyn was a screenwriter, Cricket a producer, and Marian was an actress who married the author Irwin Shaw.

For more on silent film and classic comedy please read Chain of Fools: Silent Comedy and Its Legacies from Nickelodeons to Youtube.