Con Colleano: Wizard of the Wire 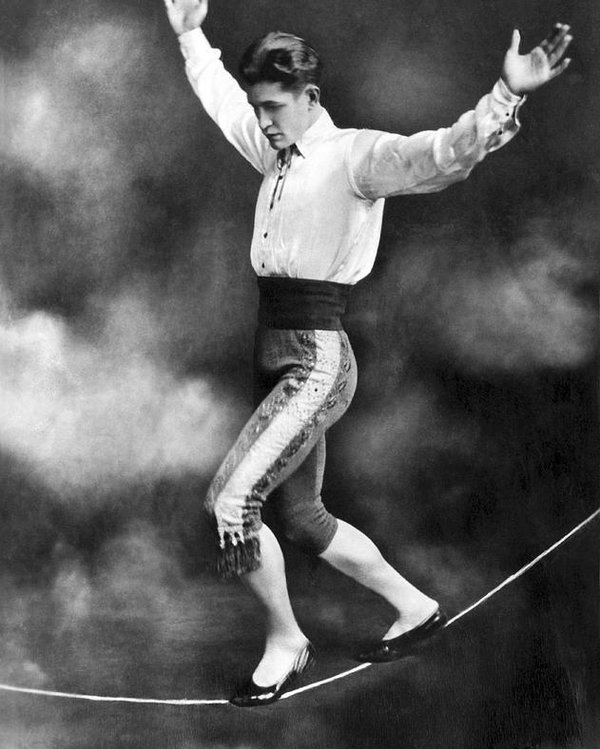 Reading about the life of Con Colleano (Cornelius Sullivan, 1899-1973) reinforces my long-held feeling that showfolk are a global spiritual family that knows no borders, more akin to one another than connected to any place on the map. They are a breed apart.

Con was the son of an Irish-Australian pugilist, a freed convict who created a circus around his family with him at the center, boxing challengers for wagered purses. Con’s mother was half West Indian, half Australian Aborigine. New South Wales was where they started their little sideshow, with the ten children specializing in various circus disciplines: clown, juggling, and acrobatics. To account for their dark complexioned family, the Sullivans adopted any number of stage names and cover stories. Initially they called themselves “the Collinos”, which evolved into “Colleanos” to give an impression that they were Italian, which was very common in the world of acrobats at that time. But later they were billed as “The Royal Hawaiian Troupe”, and in the ’20s, Con would create a Spanish persona, calling himself “The Toreador of the Wire”. He was also known as “The Wizard of the Wire”, for he made the tightrope his specialty. His wife, Winifred “Winnie” Trevail, was a dancer and trapeze artist.

In the nineteen-tens the Colleanos worked as a family act in major circuses throughout Australia, but by the end of the decade they had built up their own substantial traveling circus show, as well. Wilson, Keppel and Betty started out with Colleano’s Circus. Around 1919, (and here we have buried the lede), Con Colleano became the first person to perform a somersault on a wire. With the help of Winnie, he also learned to dance on the highwire. So he was a showman of great skill and flair, and was destined to become a great international star. In 1922, he went out as a solo act on the Tivoli Circuit, Australia’s main vaudeville chain. His siblings also traveled the circuit with an act of their own, The Eight Akbar Arabs. It was in the ’20s that Con developed his Toreador act, performing bullfighting moves and Spanish dancing on the highwire, going into his somersault for the big finish. At this stage, he toured internationally, first South Africa, then American vaudeville at the New York Hippodrome, and finally, Ringling Brothers, Barnum and Bailey Circus, where he was a star through the end of the 1930s (and in later engagements as late as the mid 1950s). In the off seasons he performed in the music halls of Europe, although World War Two put the kibosh on that for a time. Through most of the 1940s, he performed with Cole Brothers in the U.S. In 1943 Colleano doubled for Charles Boyer in the anthology film Flesh and Fantasy. He retired around 1960.

Meantime, Colleano’s siblings were also international circus, vaudeville, and music hall stars, based in the U.K. for many years. Con’s nephew, Bonar Colleano, born into this life, was to become a major British movie star. Read about him here.

To learn more about vaudeville, please see No Applause, Just Throw Money: The Book That Made Vaudeville Famous