Cantu: Master of Doves and Chickens 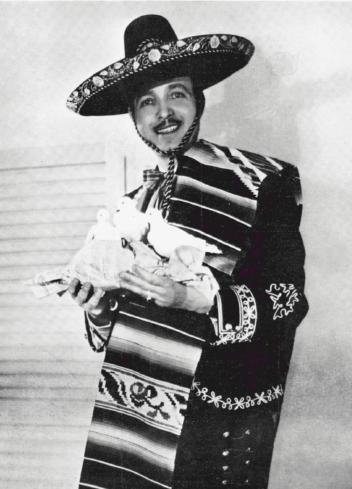 Some brief tribute today to Mexican illusionist Cantu (Abraham J. Cantu, 1896-1949). Originally from Monterey, Mexico, Cantu began his working adult life as a barber, gradually making his way from amateur to professional magician in the late 1920s, playing nightclubs, cabarets and vaudeville in the U.S., Mexico, England, Ireland and France. His nationality was a key part of his act: he wore a charro costume, and liked his act to be accompanied by the song “La Paloma”. A master of small scale magic, Cantu was known for card and cigarette manipulations. He is credited with developing the “Buckle Count” (misrepresenting the number of cards one is holding) and being the first to make doves appear. For a time, he billed himself as “Professor Tucan”, Cantu being such a common name in Mexico.

Cantu played a part on two classic comedy films. He actually has an onscreen turn in Politiquerias, the Spanish language version of the 1931 Laurel and Hardy short Chickens Come Home. And he was an adviser on the Marx Brothers At the Circus (1939). Channing Pollock acknowledged him as an influence. Cantu was killed in a car accident in Atlanta when he was just 52.

BTW, there is a contemporary actor/magician out there going by R.J. Cantu. I haven’t ascertained yet if there is a relation (Cantu being a common name) but once I learn, I will share it here.