The Invention of Humphrey Bogart 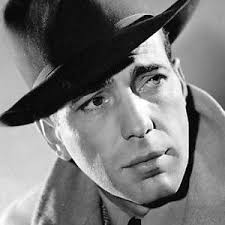 There is some debate as to whether Humphrey Bogart (1899-1957) was actually born on Christmas day but let’s go with the perverse premise that he was.

I have been late in writing about this major star principally because he was not a very show bizzy type of guy and had no track record in the variety theatre, our original bailiwick. And I have refrained from writing too much about noir and crime films (although I love them) because so many other bloggers write about this stuff and again because I simply have other priorities. Even as an actor, Bogart’s thing is not the sort of thing I can identify with or “do”. In Key Largo, I’d want to be Lionel Barrymore; In The Maltese Falcon, Sydney Greenstreet; in Casablanca, Claude Rains. It’s a different skill set, even a different way of being.

And yet Bogart was probably the first important star of the classic era whose work I knew pretty thoroughly from quite a young age.  As I was born nearly a decade after he died, this is a testament to his lasting popularity with audiences. There are some important stars of Bogart’s generation, e.g. Robert Montgomery, whom I never even saw onscreen until I was well into middle age. There had been no occasion to run into Montgomery’s films in my youth. They were no longer screened. By contrast, Bogart’s films had never stopped being popular with audiences and they showed his movies on TV all the time. When still a teenager I had already seen: The Petrified Forest (1936), Dead End (1937), Angels with Dirty Faces (1938), The Maltese Falcon (1941), Casablanca (1942), To Have and Have Not (1944), The Big Sleep (1946), Dark Passage (1947), The Treasure of the Sierra Madre (1948), Key Largo (1948), The African Queen (1951), Beat the Devil (1953), The Caine Mutiny (1954), and The Desperate Hours (1955). And I wasn’t even a particular fan of Bogart or crime/noir/gangster films. I wasn’t actively trying to see his body of work.  Isn’t that crazy? Although my girlfriend and my best friend both were big fans of his, which explains part of it, but still I’d say I’d watched the majority of these films when I was at home and on my own. They were on TV and they were good. That was enough. And they still exerted force in popular culture. Films like Woody Allen’s Play it Again, Sam and Roman Polanski’s Chinatown and Robert Altman’s The Long Goodbye referenced them. You saw clips on shows like Don Adams’ Screen Test and elsewhere. They were in circulation. (Another factor for Bogart’s continued presence in popular culture may have had to do with the longevity of his widow and frequent co-star Lauren Bacall, a quarter century his junior, who was still making screen appearances up until the present decade!)

I love Bogart’s performances in these movies as much as anyone but I am all the more impressed by the overall act of self transformation that underlay them. His was an unusual path, compared with most of the stars we’re accustomed to examining here. Cary Grant, for example, was a lower middle class guy who remade himself to seem posh. This was the more typical direction to go in. Bogart on the other hand started out with advantages; he was not a guy groomed to eat a plate of beans at a lunch counter. His was a pheasant-under-glass upbringing. He had to remake himself to seem like an Average Joe. The transformation was so thorough that it is almost impossible to imagine the raw materials. I will help you.

Bogart was a rich WASP, descended from Pilgrims. His father was a Manhattan heart surgeon; his mother a successful illustrator. His parents hoped he’d go to Yale but he was kicked out of several prestigious private schools for infractions of the rules like smoking, drinking, fighting, and bad grades, long before it even came time to apply.  Bogart was indeed a “bad boy” and a rebel but he was one of the upper echelon. Because of his screen image, you’ve probably forgotten your first impression of the first name “Humphrey”. That’s not exactly “Bud” or “Jack”. It’s practically “Sue” — the sort of name a guy has to get tough to live down. Navy service put further bark on the real Bogart.

But it would be well over a decade before Bogart learned out how to play the tough guy on stage and screen. He’d started out playing fey rich boys in Jazz Age Broadway plays in 1922, with names like Jimmy Todhunter and Horatio Channing, the kind of characters Philip Marlowe would swat like gnats. His stage characters were much more reflective of his background, and that was how he knew how to behave. Legend has it that he was the first person to bound onstage and utter the immortal lines “Tennis, anyone?” But soon he discovered another sort of racket. The pivotal role was the desperate criminal Duke Mantee in Robert Sherwood’s The Petrified Forest (1935). The role itself brought out latent qualities he hadn’t learned how to exploit yet. He had that cold, hard-bitten stare. That’s a WASP thing, but now there was passion behind it. And that raspy, tired voice. Prior to this, it merely made him seem an aging boy ingenue, who’d stayed out late too many times. Now he seemed like a guy who’d been through the ringer, who’d been put to work on the rock pile. His lisp, which had once made him seem effeminate, now seemed more like what it actually was, the result of split lips from fist fights or accidents. Before, he had seemed weak; now he seemed tough. By the time the 1940s rolled around, that was what he was, no one could imagine him as anything else. His job was made all the easier by the fact that those early stage performances weren’t filmed. They only live on as something we can only imagine.

What are the fragments that remain, the evidence of his real identity which survive? One, I think is his cool and his apparent courage in any situation. We read it in films as resourcefulness, a guy who can think on his feet. But that kind of self-assurance and boldness can also come from the confidence of a safety net. Bogart had climbed out onto many limbs and had always come out alright. Someone had always bailed him out. You become comfortable taking risks when that has been your past. Bogart has endless comfort with being in his own skin in front of the camera. I think of little moments, like shaving in your undershirt in front of a mirror with a cigarette in your mouth gracefully, small as it is. He makes it seem the most natural thing in the world. Believe me, almost no one can pull something like that off. And it is this quality of ease that explains his charisma, his attractiveness to both men and women. Think about it. Humphrey Bogart is an UGLY guy. With those bulging, staring eyes and that huge head. He’s always reminded me of Lon Chaney in The Phantom of the Opera. Sacks under the eyes, very little hair, a mouth like an open wound, English teeth.  Yet he weaves a magic spell that turns him into a sex symbol. That’s the magic of performance.

A more overt expression of who he was comes from his associations and alliances. The relationship with Bacall, who also went to fancy private schools, is the most obvious. The pair of them may be among the earliest, most prominent “Hollywood elite” Left Wingers, even before the Actors Studio people came along. That’s a subject to which we will return in a subsequent post.

Bogart’s last film The Harder They Fall (1956) hints at where he might have gone in future. He costarred with Method Actor Rod Steiger in this gritty boxing and corruption drama. As standards relaxed over the ensuing decade he likely would have been one of the ones who kept pushing the envelope, as he always had done. Would he had softened as he aged? Played some different kinds of roles? We may be lucky not to know. As it was, cancer took him in early 1957. Thus was his image, the one he worked so hard to create, preserved intact for all time.