Of Telly Savalas and Kojak

January 21 is the birthday of Aristotelis “Telly” Savalas (1922-1994).  It is hard to describe what a phenomenon his hit tv series Kojak was in the 1970s. It was not just an omnipresent pop cultural fad, it was a bellwether.

It actually became a trope in storytelling that when a foreign character wanted to show they knew something about America, Kojak and his catchphase “Who loves ya, baby?” would be the touchstone, in much the same way that John Wayne or baseball players or Betty Grable might have been employed in an earlier era. This cult of Kojak was driven by Savalas’s magnetic (and easily imitated) personality, which was very Rat Pack, jazz, swing, be-bop, almost like he was delivering free verse poetry at a coffeehouse.

Savalas’s bald pate cemented this image of “hip”. He was definitely a gold medallion wearing kind of dude. He was all about the threads. Sometimes he wore his top coat over the shoulders like a cape, Mediterranean style, rather than with his arms in the sleeves like a mere mortal. Not surprisingly, he recorded five record albums at the height of his fame in that husky voice of his (1972-1980). When I was a kid, you saw him singing on variety shows almost as much as you saw him in dramatic roles. 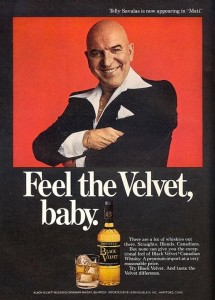 Savalas’s father ran a Greek restaurant in Nassau County, Long Island. His Hellenic identity would play a major role in Savalas’s life until he died. He was not only one of the best known and most successful Greek-Americans of his day, but he actively belonged to Greek cultural organizations and gave to Greek charities. He served three years in World War II (1943-46) experience that served him well in the many WWII pictures in which he appeared. Greece was occupied by Axis powers for most of the war, which must have fueled his desire to serve tremendously.

Savalas graduated from Columbia in 1948, with a degree in psychology, but also took courses in radio, and that proved to be his true love. He hosted local radio shows, worked for Voice of America and then broke into TV, as a producer in the sports and news divisions at ABC.

But he must have been a character offscreen as well as on. Can you imagine him behind the cameras? There’s something just kind of wrong about that. It wasn’t gonna happen. The guy was a character, an irrepressible character. Starting in 1959, he began to get cast in lots of guest roles in episodic television, and his career just zoomed along.  Kojak is so indelible you easily forget that even if he had never done that series, Savalas would have had quite a memorable career and been famous as a character actor anyway. With the gravelly voice, coarse, somewhat angry visage, and tough, urban personality, he was a shoe-in to play both cops and criminals, supervillains, army grunts, and jerks of every description. He was even in lots of westerns (sometimes as a Mexican). Savalas didn’t do nice guys.

He was cast as a regular on a short-lived tv series called Acapulco (1961). He had a role as a police detective in The Young Savages (1961) with Burt Lancaster. He was in Cape Fear and Birdman of Alcatraz, both 1962. He has a very small role in Danny Kaye’s last starring comedy The Man from the Diner’s Club (1963). He’s extremely memorable in that Twilight Zone episode “The Living Doll” (1963), where he plays the most evil, abusive stepfather ever (or at least on American television until that time. He throws lit matches on a doll!). 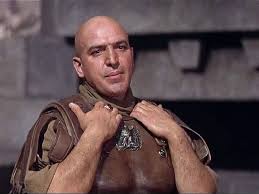 He played Pontius Pilate in The Greatest Story Ever Told (1965), going full-bore Mr. Clean for the part. Something clicked. He kept his dome shaved. That had to have felt like a risky move at the time, but it paid off, for the distinctive bald cranium got him cast more than ever after after that.

He’s in World War II pictures like The Battle of the Bulge (1965), The Dirty Dozen (1967) and Kelly’s Heroes (1970). Behind his Kojak “look”, the get-up I most often picture him in is army khakis, with one of those knit “Radar” caps and dog tags hanging around his neck. 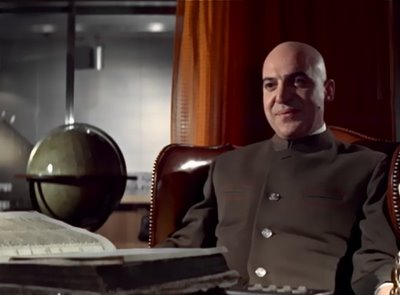 He even played Blofeld in the Bond film On Her Majesties Secret Service (1969)!

In 1973, came the iconic 70 cops series Kojak, which was my first introduction to the man. Kojak was a tough-talking, cheerfully obnoxious, vociferously cranky and impatient, lollipop-lickin’ New York City police detective in the era when NYC was famously at its nadir — a sort of cesspool of street hookers, dope dealers, rapists, armed robbers, and piles and piles of garbage for cops and robbers to trip over during foot pursuits. The show was gritty and influential.

The show had other memorable characters, especially Stavros, an overweight and dumb Greek detective played by Savalas’ own brother George Savalas, whom Kojak would abuse mercilessly. He was the comic relief. Kevin Dobson played “Crocker”, Kojak’s young associate who was less rough around the edges than his mentor. And Dan Frazer played Kojak’s boss, Captain “Frank” McNeil, who was constantly arguing with Kojak about his rogue tactics, causing him all kinds of headaches with the higher-ups. I can hear the pair of them arguing in my head right now!

I don’t know if Salavas was official Rat Pack, but I certainly associate him with that bunch. He had his own stage show at the Sahara in Las Vegas. He did those ads for “The Players Club” credit card. Angie Dickinson, who WAS Rat Pack had her own show Police Woman — I associate the two stars with each other already, but to my delight I see that in 1989 they teamed up for a Kojak tv movie! And of course he appeared with the Rat Pack in Cannoball Run II (1984) because, ya know, the universe isn’t perfect.

When you score big like Savalas did with Kojak it’s hard to escape your doppelganger. Savalas did better than many, although those other outings tended to be cheesy: I refer to stuff like Irwin Allen’s Beyond the Poseidon Adventure (1979), The French Atlantic Affair (1979), and a couple of Dirty Dozen sequels. His last role was the villain in Backfire! (1995), a spoof of Backdraft.

It’s no shock or secret that Savalas was a smoker. In fact, the famous lollipop was an attempt by Savalas (and Kojak) to curb the habit. He died of cancer at the relatively young age of 72.