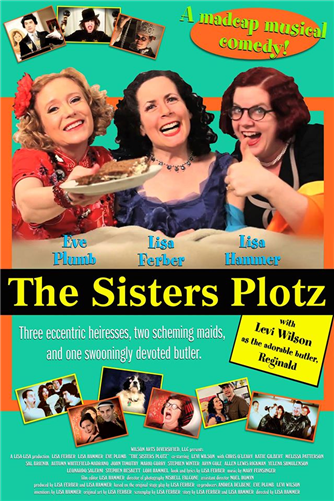 As we blogged here yesterday, a new feature length film of the popular web series The Sisters Plotz premieres tonight at Anthology Film Archives, presented by New York Women in Film and Television. The show and film are a kind of three way collaboration combining the celebrity power of The Brady Bunch’s Eve Plumb (my middle school crush, I’m not ashamed to say), the deadpan-slapstick direction of underground film-maker/actor/ musician  Lisa Hammer, and the sparkling retro-writing of screenwriter/ songwriter Lisa Ferber. As they roll out the movie, we’ll have interviews with the principals, including some great behind-the-scenes video of the (spoiler alert!) pie fight. Today, we continue with a Q & A with  Lisa Hammer, who directed the film and portrays the character of Ladybug Plotz.

You’ve created an amazing, voluminous body of highly distinctive work, and I am fairly dazzled. And watching a bunch of it helped me hone in on which aspects of the Plotz ouevre come from you, and which from the Ferb. The overlapping parts I notice are a love for the antiquarian and a love of style (not just clothes but other aspects of the mise en scene as well). One area of divergence one could point out might be a greater darkness, almost nihilism in your sensibility which I relate to and also identify with many artists our age. “Grunge-iness” for lack of a better word, deriving a lot of humor and freedom from bringing an irreverent “fuck it” to many aspects of the process. Maybe I’m tipping my hand a little, but them’s the beginnings of how I would grope toward describing your work. So the first question would be something like, can you speak to that — the interaction of your’s and Ferber’s sensibilities? Who contributes what? How are you the same, different etc?

I love your descriptions! I definitely bring a playful “fuck it” my work. I am guessing it’s from my punk/goth teenage years that I haven’t outgrown. Plus growing up on radically absurdist humor like Monty Python, etc had an influence. I also love the aesthetics of bygone eras. My grandfather, Bayard Stockton, had a huge collection of 78″ dixieland records which he would play for me, and just hanging around the Stockton house was like taking a time machine to the past. I grew up being obsessed with the 20’s, 30’s 40’s, even the 60’s- watching tons of silent movies and technicolor musicals. I wanted to live inside the films. While classmates had celebrity crushes on Sean Cassidy, mine were on Rudolph Valentino and Buster Keaton. When high school came around I added hotties like Dave Vanian to the crush-mix, and, well, here we are.

How’d you guys meet, how did all this come about?

Lisa Ferber and I met through a friend (who has been a great supporter of mine since the 90’s) Shade Rupe. He asked us to act in a film he was directing for the “It Came From Kuchar Film Festival” called Whimsellica’s Grand Inheritance, and we won the audience award. My husband and creative partner Levi Wilson acted in that frantically fun film as well, written by Lisa Ferber. We all hit it off immediately!

I think we brought the Plotz cast in about 50-50 hers and my contacts. All of them are the “cream-of-the-crop” as performers and as people. The crew was mostly from my end since I’m a filmmaker, and these were very bold kids who had emailed me that they were graduating from film school and wanted to help on my next film as interns. They all learned very quickly and rose to great positions in this film, from DP’s to Co-Producers. I’m so proud of them!

I love Lisa Ferber’s style and her sense of whimsy. I never know what to expect from her dialog and I’m always pleasantly surprised! There’s a perfect mix of archaic phrases, absurdist humor, expert word-smithery (word?) and modern popular references that I have not seen in anyone else’s writing. I love to contribute story because I’m an idea person and I blurt out ridiculous ideas. Lisa F takes them and makes them come alive and make sense in such a beautiful way.

Acting in this was a dream. I got to bring in my love of science and inventions and also my operatic vocal training and comedy timing. My years of acting classes have also been put to use, happily no money was wasted through years of “trying to make it look like I’m not acting”, by getting fed up with acting rules, throwing it all out the window, then just convincing myself that I’m really that person at that moment. Whew!

Talk about how Eve fits in. Your sensibility is SO underground, and here you have the ultimate mainstream tv star as one of your cast. Is there clash in approaches? Is the clash a good thing?

Eve is SO funny, dark and twisted, just like us. She gets it right away. And she’s so pro on set it raises the bar of production to a new level.

Was it always the plan to turn the series into the feature?

No, at first Lisa asked us to perform in the staged reading in NY, then that night it dawned on me that we should film it, for fun. Then after we did that I put it online and we became a Funny or Die top 5 video, leading to some insult posts by confounded jocks, which only encouraged us to escalate. So then I thought it should be a TV series, but then I woke up one day and my heart screamed “feature film!” (I have voices in my heart.)

What are the plans for the film after the premiere?

After the premier we will do the festival circuit and then look for a distributor/sales agent.

What else ya got going on?
My next big project is Maybe Sunshine an original series about a 48 year old woman (played by me) in “Millennial-trust-fund-brat-haven” New York City, trying to restart her rock band. Based on my real life band Radiana and my countless absurd experiences singing in bands since the 1980’s. We are currently inviting people to get involved with our show, which will launch in early 2016. My character faces the funny little obstacles that come at women as they age. There are lots of quirky characters in the show as well, and some great guest stars like comedians and musicians, and music by several cool bands. It’s kind of like Louie meets The Monkees. I will also be collaborating on story with Lisa Ferber for her “Fondue Film” project!
For more information on tonight’s screening, go here.