As I’ve blogged about recently, I’ve been re-engaging with a lot of old music lately and hearing and appreciating elements I’d not heard in the past. The Beatles and Paul McCartney (this is his birthday) among them. We recently wrote about his bass playing on “Hey Bulldog” and possible guitar playing on “It’s All Too Much”. 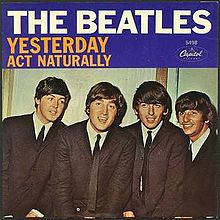 I’ve begun to notice that his contributions (bass, vocals, piano, whatever) are often the glue that holds a song together, often when it’s not even one of his own songs. You really begin to appreciate his genius in the oddest places. For example, the Beatles’ 1965 version of the Buck Owens country tune “Act Naturally” is the sort of thing when I was a teenager I would just move the needle over (I was more of an “I am the Walrus” Beatles fan). I just thought this tune was boring, unworthy. Usually people praise George Harrison’s guitar-picking on it, and that’s fine, but it hardly makes the track unique now does it? But lately I’ve been playing it constantly and hearing its many virtues. You can hear Lennon’s skiffle experience in the rhythm playing for example. But I am especially fond of McCartney’s ON THE MONEY background vocals, a hilarious, subtle and affectionate send-up of Nashville. Mostly, he’s just doing it RIGHT, and I suppose that’s my point, he’s such a musical natural that he is in command of whatever he does.

A similar example of something I used to dismiss, HATE in fact: his 1980 solo single “Coming Up.” “Blecch!” I thought. I was just beginning to discover the Beatles at that stage. This tune sounded like such a come-down from his heights, just a pandering, dumb piece of radio garbage. Now I listen to it and I’m like, “My God”…it’s actually no different from the Little Richard covers he’d done a couple of decades before, with a simplicity more like James Brown, and furthermore he played all the instruments himself. So now it sort of impresses me. But it is also reportedly also the song that inspired John Lennon to come out of retirement, so it can’t be that good.

Two McCartney tunes from 1968 I only discovered over the past year or so also argue further for his genius. “Thingumybob” a John Philip Sousa-like thing he recorded with an old-tyme brass ensemble called the Black Dyke Mills Band to be the theme song for a BBC tv show. This is the McCartney I want! Funny and astonishly adept at some idiom that died before he was even born. And very very English.

Another tv theme he composed that year was “Step Inside, Love” which Cilla Black used for her weekly variety show, and had a hit with. Here McCartney is doing more of a Burt Bacharach – Hal David kind of thing, jazzy, romantic, sophisticated. The Cilla Black version has these cool exploding horns on it; a version McCartney recorded himself during the sessions for “I Will” is very quiet…the sort of thing you’d sing next to the fireplace to close the sale with your date for that night,  Capucine. (Oh, sorry, that’s my fantasy. In McCartney’s case we’ll say Jane Asher).

In light of the perfectionism he could bring to the table and could demand from his bandmates (dozens of takes and overdubs for “Maxwell’s Silver Hammer”) McCartney had an interesting Achilles Heel, one that I seldom hear identified or remarked upon, and it’s one that’s sort of hippie-like but with a tin ear for what’s actually important. He loves to experiment and sometimes rather than making the experimentation be about creating a work that is highly integrated wrought and perfect (e.g., Sgt. Pepper and Abbey Road) he sometimes likes to go in the complete opposite direction and make something that is completely open-ended, directionless, formless and revealing of nothing but warts. These occasions include the Magical Mystery Tour film, the Get Back/ Let it Be abortion, his half-assed debut solo LP McCartney, the formation of Wings with his non-musical wife at the forefront, the egregious Wings debut LP Wild Life,  and the truly dreadful film Give My Regards to Broad Street. Each time, the results of his experiments are close to atrocious, and yet it’s like he never learned from it. Interestingly, it’s HIM and not the presumably more anarchistic Lennon who dashes the mythology of the Beatles as God-like untouchables with this shocking laxness and sub-par product.

Only someone who’s so highly thought of could be so disappointing. There’s no post-Beatle McCartney album I can sign off on completely in terms of enjoyment, not the way I could sign off 100% on Harrison’s All Things Must Pass, for example. For me Ram ranks highest, followed by Tug of War, followed a good way back by Band on the Run (over-praised and unsatisfying), with Venus and Mars even farther back, and everything else way farther back. This confounds plenty of people. “What’s your problem?” Well, I’m a huge fan, and a critic, and I know what I want, and I know what I feel I have a right to expect from a guy who also made X, Y and Z.

When I think of McCartney’s best work it is stuff like “Yesterday,” “Eleanor Rigby”, “Penny Lane,” “She’s Leaving Home”, and the Abbey Road suite. One wants or expects some kind of album length WORK that would mark some kind of progression forward. Based on Sgt Pepper and Abbey Road, fans had a right to expect or hope for seriousness, ambition, integrity, follow-through . Almost incredibly, rather than becoming less lightweight, McCartney became more so. The thesis of “Silly Love Songs” is well taken, but this isn’t about the lyrics. It’s about the music. What I’m talking about doesn’t have to be the slightest bit deep. Music is abstract. It doesn’t have to have ideas. It’s emotional. Pet Sounds, for example, is not Tennyson. It reflects teenage concerns, but is a piece of beautiful, coherent, integrated music. And McCartney even went there. Most people regard McCartney’s Brian Wilson tribute “Back Seat of My Car” as a mini-masterpiece, and the content couldn’t be more “high school”. But he applied himself seriously to the music. An entire album like that would have been the bull’s eye.

I was excited by the advent of the Liverpool Oratorio. “Ah!,” I thought, “This is what he should have been doing right along.” But then I heard it. The music is fine (and it’s always a boon to have George Martin involved), but I think he overshot by having choirs sing his soppy pop lyrics. He should have sung it all himself, and offset the snooty string sections with electric guitar…and THEN you’d have your pop masterwork.  Sez I the oracle.

Watch out when you get your birthday present from me — it may be ticking!