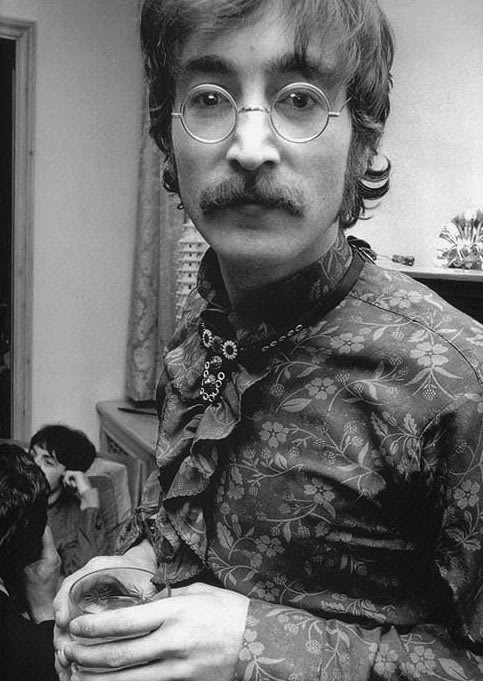 Today is the birthday of John Lennon. Having already done posts about Paul, George and Ringo, it’s more than fair that I do one about their bandmate, although for the past few years I have been experiencing something of a personal backlash against my once-favorite Beatle. There were many “Johns” of course, and he was many things to many people, but in retrospect it’s dawned on me that my favorite “John” embraces only a small part of his overall career. I have never been terribly enthralled with the young Lennon, the Teddy Boy punk who covered the songs of his 1950s heroes. I am more interested in the inventive pop songwriter, humorist and cartoonist, the guy who is influenced by Lewis Carroll and Edward Lear. I love his songwriting for The Beatles, peaking around 1965-67, though I’m still interested (though slightly less so) in his conceptual art and primal scream period 1968-71. But it seems to me his powers were already waning by then. And of course, after that (around the time he moved to New York) the decline is precipitous. Where once both his tunes and lyrics were  intoxicating they now became facile and an embarrassment as he went from uninspired anthems for a politics no one ever embraced…to maudlin easy listening hits every bit as nauseating as McCartney’s worst offenses. Was England his muse; did New York kill his creativity? Feels that way, although as I said he seemed to be running out of juice already.

For me the apex comes with Rubber Soul songs like “Norwegian Wood”, “Girl” and “In My Life” and ends around the White Album. But I am afraid I am greedy, I want more, and I don’t understand the lack of productivity. He wrote those two amazing strange books In His Own Write and A Spaniard in the Works (and those are pretty thin) and after that, only fragments. (Compare that to the output of Carroll, Lear or American humorists like Thurber, Perelman, Benchley). Compare his song output to that of Brill Building or Tin Pan Alley songwriters. He was also a promising film comedian…but after Hard Day’s Night, Help! and How I Won the War, nothing.

His non-contributions to the film Yellow Submarine to me speak volumes. Lennon is an artist and he has nothing to do with the visuals on a Beatles animated film? He is a funny movie comedian and he doesn’t even do the voice-overs for his own character? (Neither did the other three Beatles). After a while, you have to ask yourself, what precisely does the man do? For nearly five years 1975-1980, the answer was “nothing” and after his wretched, mostly unlistenable albums of 1972-1975 it seemed a wise choice. The sounds he made when he emerged from retirement were not encouraging — in fact, worse than ever. (To qualify, the singing, musicianship and production on these last albums are all exemplary. But the songwriting…from someone who is supposed to be one of the greatest songwriters of his age, is mostly, to be charitable, disappointing).

This is why my Lennon post has come last…the negatives are what spring first to mind, even though he is one of my favorite pop artists of the late twentieth century! People who are not critics won’t understand…I’m hardest on him because I love him the most. But what I love him for was apparently not what he loved doing most, which seems to have been lying around on the sofa. In sum, I guess I am one of those demanding fans, or as he once put it, the “fucking peasants” who just happen to buy his records.

This is far from my last word on Lennon; a further appreciation is here. And several more posts on the Beatles are here.

To find out more about show business past and present, consult No Applause, Just Throw Money: The Book That Made Vaudeville Famous, available at Amazon, Barnes and Noble, and wherever nutty books are sold.