The Story of Mankind: The Marx Bros Last Movie, Though Not as a Team 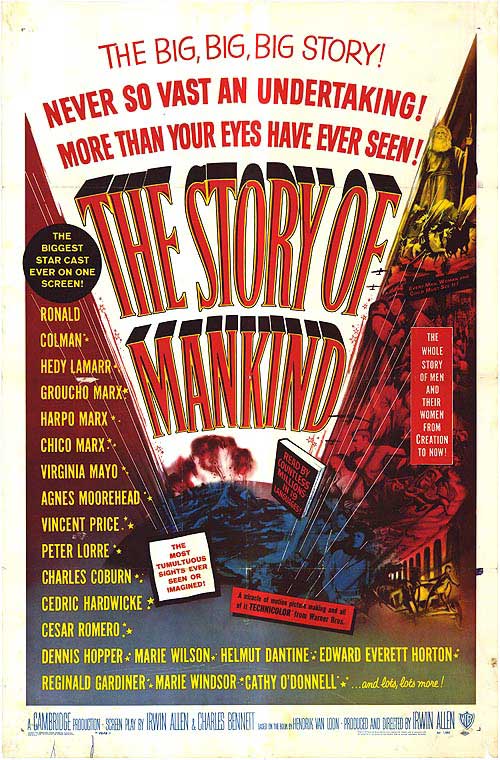 You’ve heard of The Big Store? Well this is even better because it’s the “BIG, BIG STORY”.

Every Marx Brothers fan has heard of The Story of Mankind (1957), the last cinematic appearance of Groucho, Harpo and Chico, although the three of them don’t appear together in the same scenes. The film is the brainchild of Irwin Allen, producer of one of my favorite films The Poseidon Adventure, and mixes elements of science fiction camp with the big budget sword-and-sandal spectacle camp of Cecil B. DeMille. Although without the big budget…the big set pieces are all done with stock footage from previously made Hollywood films. Such big budget attractions as the film boasts are represented by the all-star cast.

Sir Cedric Hardwick plays the High Judge in the Great Court of Outer Space, where a jury of otherworldly beings sits on judgment on mankind for having invented the “Super H Bomb”. The question at hand is whether to destroy mankind (represented in a Skin of Our Teeth kind of way by Ronald Colman) or give him the chance to work out his own destiny. Arguing against the continued existence of the human race is one  “Mr. Scratch” played with typical amused archness by Vincent Price, at the peak of his form. The two men argue “pro” and “con” by giving us a survey course in human history, as played by an insane gaggle of Hollywood celebrities. It’s like reading Oswald Spengler by way of Ed Wood.

Here’s just some of what happens: John Carradine as Khufu, an Egyptian Pharaoh; silent film star Francis X. Bushman  as Moses; Virginia Mayo as Cleopatra; Peter Lorre as Nero; Heddy Lamar (against type, I must say) as Joan of Arc; Agnes Moorehead as Queen Elizabeth; Edward Everett Horton as Sir Walter Raleigh; Cesar Romero as a Spanish emissary; Marie Wilson (of My Friend Irma) as Marie Antoinette, with Franklin Pangborn as her courtier; and — this just may be the best — a very young  Dennis Hopper as Napoleon (eat your heart out, Groucho!). With Marie Windsor as Josephine!

For the most part the Marx Brothers come off okay, although one wants far more of them (their screen time total is probably about five minutes).

Groucho’s scene as Peter Minuit swindling the Indians out of Manhattan is actually very funny as written, although (as he tended to be in later years) he is way too slow in his delivery. And, naturally, the Indians are vaudeville representations, both inaccurate and disrespectful, if even that.

Harpo’s silent turn as Sir Isaac Newton getting bonked on the apple is shorter. He uses his harp as an apple slicer, a trick he often did with hard-boiled eggs in later years. 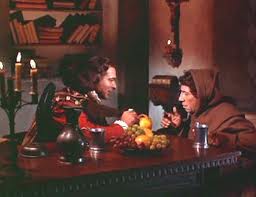 Chico’s turn is the most ignominious…he is reduced to playing the friend of Columbus. The first time I watched the movie, somehow his entire scene went by without me even recognizing him. (They could have at least cast him as Columbus!) What would Chico Marx be like as Columbus? I wrote a play that explores that very subject in 1992, the 500th anniversary of the historic voyage. I produced a truncated version of it in 2002. Maybe we’ll revive it some time!